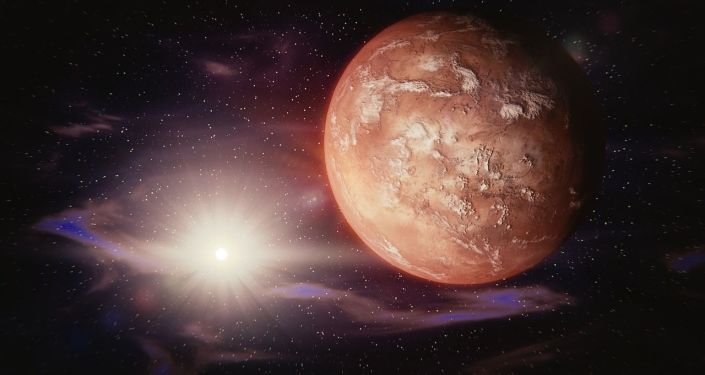 Scientist Says Life on Mars May Exist, Explains Where it May Have Come From

As the scientist explained, future manned missions to Mars will inevitably result in terrestrial microbes arriving on the Red Planet.

While scientists strive to determine if life exists on Mars, Christopher Mason, a professor at Cornell University's Weill Cornell Medicine, has suggested that some lifeforms might have hitchhiked to the Red Planet on spacecraft from Earth.

In an article published by the BBC, Mason explained that, despite NASA engineers from the Jet Propulsion Labs employing “strict and thorough” protocols while assembling spacecraft, in order to “minimise the number of organisms that might inadvertently hitchhike on a space mission,” some organisms may have survived the clean rooms and even the journey to Mars.

"Microbes have been on Earth for billions of years, and they are everywhere," he wrote. "They are inside us, on our bodies, and all around us. Some can sneak through even the cleanest of clean rooms."

Mason also mentioned evidence of microbes that "have the potential to be problematic during space missions."

"These organisms have increased numbers of genes for DNA repair, giving them greater resistance against radiation, they can form biofilms on surfaces and equipment, can survive desiccation and thrive in cold environments," he explained. "It turns out that clean rooms might serve as an evolutionary selection process for the hardiest bugs that then may have a greater chance of surviving a journey to Mars."

The scientist pointed out that the probability of "some fragments of microbial, and maybe human DNA" being present on Mars emerged since the first Soviet probes reached the planet in 1971, so even if we do eventually detect life on Mars, there's a chance that it will be of terrestrial origin.

And future manned missions to Mars, Mason added, will inevitably result in the arrival of terrestrial microbes that exist on and within human bodies on the Red Planet.

"These microbes too will likely adapt, mutate, and change. And we can learn from them too," he mused. "They may even make life on Mars more tolerable for those who go there, since the unique genomes adapting to the Martian environment could be sequenced, transmitted back to Earth for further characterisation, and then utilised for therapeutics and research on both planets."