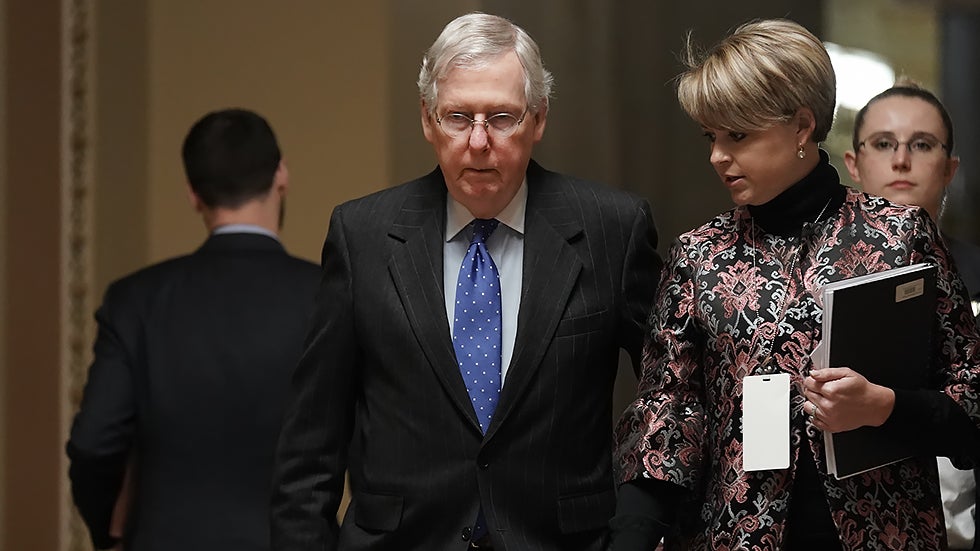 The Senate cleared a nearly four-month extension of intelligence programs that expired on Sunday as part of a deal that will also allow for votes on broader surveillance reforms.
The Senate had been expected to hold an initial procedural vote Monday on the House-passed bill that paired extension of the three expired USA Freedom Act provisions with some changes to the court established by the Foreign Intelligence Surveillance Act (FISA).

Instead, Senate Majority Leader Mitch McConnell (R-Ky.) came to the floor minutes before the scheduled vote and passed a 77-day extension of the three USA Freedom Act provisions by voice vote.

The extension is retroactive to Saturday. It still needs to pass the House, which is currently out of town. Asked if they could support the Senate deal, a senior Democratic House aide told The Hill that “leadership [is] discussing.”

To pass the House without bringing lawmakers back for a vote, it would need consent from every member. One hundred and thirty six members voted against the House deal last week; it's unclear if any of those members would return to Washington, D.C., this week to block a clean short-term extension.

The three provisions of USA Freedom impacted by the Senate extension are a "lone wolf" program, dealing with individuals potentially inspired by but not directly linked to a terrorist organization; "roving" wiretaps that let the government track an individual across multiple devices; and Section 215 which includes a controversial phone records collection program.

Senate Republicans had indicated on Monday that they had reopened negotiations with privacy hawks on a short-term extension. Privacy hawks had tried last week to pair a 45-day extension with votes on changes to the House bill, but Senate Intelligence Committee Chairman Richard Burr (R-N.C.) blocked that.

“We’re working on trying to process both of these measures. Those discussions have been underway over the weekend, and we’re hoping to move with dispatch on both the House [coronavirus] passed bill, once we get it, and some way to move forward with the FISA issue as well,” McConnell told reporters about the ongoing discussions.

Sen. John Thune (R-S.D.), his No. 2, said they were trying to figure out if a “short-term extension” could pass.

As part of the deal, the Senate will vote on amendments once it turns to the House legislation, including a proposal from Sen. Rand Paul (R-Ky.) to block FISA warrants from being used against Americans.

It is also expected to vote on an amendment from Sen. Mike Lee (R-Utah) that would bolster legal protections for individuals targeted for surveillance.

The deal comes after Paul and Lee and their allies were able to throw up procedural roadblocks to prevent the Senate from passing the House bill last week ahead of Sunday's deadline, forcing the intelligence programs to lapse.

Opponents of the House bill argue it does not go far enough to reform the surveillance courts, which have been subjected to growing scrutiny after Justice Department inspector general Michael Horowitz found 17 inaccuracies and omissions in the warrant applications targeting Trump campaign associate Carter Page.

"We applaud the many senators who refuse to cave to efforts to jam a weak surveillance bill through Congress without debate and amendments,” said American Civil Liberties Union senior legislative counsel Neema Singh Guliani in a statement. “The inadequate House bill must be amended to further reform the intelligence courts, limit large-scale collection of Americans’ information, and ensure the government complies with its constitutional obligations."
#Coronavirus