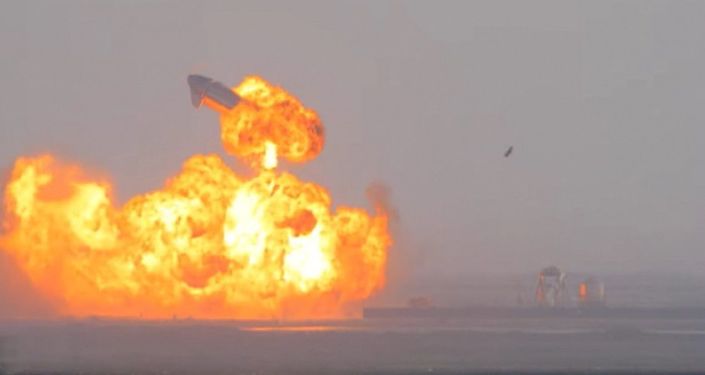 For a brief moment on Wednesday, aerospace company SpaceX managed to officially record its first successful Starship landing, before the spacecraft unexpectedly exploded right before the watchful gaze of researchers and fans of the project.

The test, which took place at the company's Boca Chica facility in Texas, was the third such model of the Starship effort to be tested by SpaceX. The previous two - SN8 and SN9 - both ended in flames.

Video of the SN10 showed it reach its targeted altitude of 6 miles, before managing to cut off its engines in order to hit the desired apogee. The rocket was then seen in a free fall, an act subsequently followed by the trademark flip maneuver to execute the vertical landing.

For a brief period of time, a success was marked.

But then, just as fans began to cheer on the project's success, disaster struck about 10 minutes later, and the SN10 prototype exploded after touching down. They say that third time's a charm, but not this time, it seems.

​Surveillance footage of the eruption shows the Starship model shoot upward, as a fiery cloud envelops the area. The damaged SN10 is seen crashing back down on its side.

​It's presently unclear what exactly prompted the explosion; however, speculation suggests the explosion unfolded as a result of a somewhat rough landing and a methane leak. Shortly before SN10's demise, the model was seen slightly leaning on the launch pad.

Netizens, on the hand, have joked online that the sudden incident was SpaceX's way of undertaking a "rapid unscheduled disassembly." Another remarked that it was just a "celebratory explosion."

Earlier, SpaceX engineer John Insprucker explained during the company's livestream of the Wednesday test that the launch's main objective was to collect data on computer-controlled movements during the rocket's descent before landing.

The test was initially scheduled to take place earlier in the day, but was ultimately delayed after an onboard computer detected an engine was producing more thrust than was anticipated, ArsTechnica reported.

Starship is intended to be SpaceX's fully reusable Mars rocket system that will one day transport astronauts on future space missions to the Earth's moon and possibly the red planet. SpaceX founder Elon Musk previously indicated that he anticipates the prototype will reach orbit sometime in 2022.