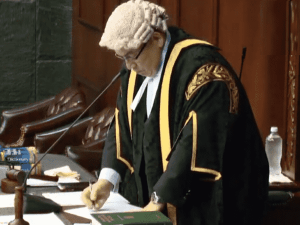 House Speaker McKeeva Bush says he has reported a social media hack to the police after he appeared to post his cell phone numbers underneath a picture of a scantily clad woman, a post that was circulated widely on several different sites over the weekend.
But Bush has not denied engaging in angry exchanges, also on social media, with supporters of the ‘vote no’ to the cruise port campaign. Bush cursed out several opponents in a number of early morning social media attacks.

Bush seemed particularly incensed with Johnny Doak, the son of local architect John Doak and step-son of senior Dart executive, Jackie Doak. Bush accused the younger Doak of lying about him having an interest in the latest Seven Mile beach bar that is catering to cruise tourists.

Although Doak did not directly name Bush, the speaker made the assumption that he was the one being referred to, as it is understood that one of Bush’s relatives is a partner in the ‘pop-up-bar’ Coral Beach, by Royal Palms on leased beachfront land belonging to Dart.

The speaker described Doak as a “son of a bitch”, in what appeared to be one of several early morning tirades against those opposed to the cruise project across social media platforms over the last few days. At one point Bush even appeared to demand that Doak meet him face to face on the steps of the Legislative Assembly.

Bush took aim at several other people, engaging in exchanges about why they do not support the port, and attacking Caymanians for being foreigners.

He also made false allegations against Johann Moxam, accusing him of previously being involved in a cruise port bid, which is simply untrue. This false narrative was first peddled publicly by Premier Alden McLaughlin in the Legislative Assembly.

Social media users who saw some of Bush’s exchanges were all clearly shocked by the language used and the approach taken by the speaker as he engaged with voters over the controversial topic and the forthcoming referendum campaign.

Those campaigning against the cruise berthing project will be in the heart of the speaker’s West Bay West constituency this evening at the John A Cumber Primary School for the second in a series of public meetings, where two veteran Caymanian sea captains will be making guest appearances. The CPR group will be presenting their case and encouraging people to vote ‘no’ on 19 December, when Cayman goes to the polls for a rare opportunity to make a direct democratic decision about a critical matter of national importance.