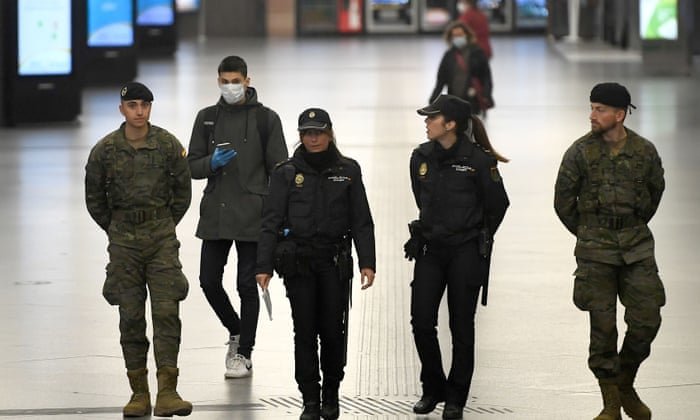 The coronavirus pandemic threatens a crisis for human rights too

People could soon be arrested for a sweeping range of new offences in the UK, says Guardian columnist Afua Hirsch
You can learn a lot about someone’s perspective from what they find reassuring at a time like this. This week I saw a private briefing from a bank, soothingly reassuring its clients that “this feels more like 9/11 than 2008”. I think the point was to let investors know that this crisis is not systemic. It felt a bit like updating the old wartime spirit for today’s hyper-capitalist economy: “Keep well-capitalised, and carry on.”

I can think of a host of reasons why 9/11 does not bring calming thoughts to mind, but one is the long-term impact it had on human rights. Back then I was in the early stages of becoming a human rights lawyer. My very first day in court was with the team defending a victim of extraordinary rendition, where Britain had helped facilitate his torture. By the time I was practising, the 7 July London bombings had happened, and so had draconian new laws – 90-day detention without trial, plus sweeping surveillance and monitoring. Many Muslims remember this as the time that racial profiling and state harassment – in airports, on the tube, in the street – became the new normal.

This might sound like a strange issue to raise when the national priority is – understandably – how to stop the spread of coronavirus, treat the sick and tackle the hit to the economy. But since last month, when the government drafted emergency regulations to grant police new powers – and more far-reaching laws are expected this week – the potential has been building for a clash between liberty, privacy and public health measures. The authorities now have the power to arrest and detain someone they believe is infectious for up to 14 days, to move that person around from custody facilities including secure hospitals, and to take blood or saliva from them by force, even if they are a child.

The legislation set to come before parliament is likely to ban public gatherings, to widen police and immigration officer powers of detention and restraint, to give doctors powers to sign death certificates without seeing the deceased person’s body, to allow fast-tracked burial and cremation, and to strip back services in care homes. People who refuse to self-isolate could be made to do so using the always contested “reasonable force”.

Our human rights protections – long maligned by many of the politicians now running our pandemic-stricken nation – were designed for moments such as this. They contain specific exemptions for situations in which the state needs to contain the spread of infectious disease. And the continuing shutdown caused by coronavirus doesn’t make them less relevant, it makes them more important than ever.

The proposed measures will contain safeguards – as they are constitutionally required to do so – especially rights to appeal. But this being a government that has decimated legal aid, brought our court system to its knees and repeatedly attacked the judiciary, a key element of trust is already compromised.

Trust is one of those ingredients in a democratic process that is hard to notice until it is gone. But this government’s cavalier approach to applying the rule of law at the best of times – let’s remember the prime minister misled the Queen and illegally prorogued parliament – does not inspire confidence at a time of crisis.

Lawyers who focus on the right to human dignity in the care of vulnerable or elderly people were appalled to hear Boris Johnson suggest that the deaths of vast numbers of British people would be an acceptable price to pay for so-called “herd immunity”. One QC compared the idea to Germany’s post-9/11 attempt to permit hijacked passenger planes to be shot down, as if the lives of those on board were expendable. Similarly, he suggests, the very idea of herd immunity would have “subordinated human dignity by treating it as a quantifiable entity that can be measured and weighed in the balance.”

There’s the potential for a kind of tyranny of the majority – one of the reasons we need human rights in the first place – and then there are the new, established but upgraded, tyrannies of the state. China has developed an app of remarkably intrusive proportions, using facial recognition to track both your movements and those of everyone in your proximity, so that they can be tested in the event you become infectious.

Donald Trump has insisted on a project of deliberate racial demonisation by calling Covid-19 the “Chinese virus” – inflaming what we already know to be harmful prejudice against east Asian people, including those who have suffered shameful abuse in Britain. In one of the most surreal responses to the pandemic, commentators who are usually allergic to this form of social justice have belatedly discovered the concept of reparations – not for the genocidal abuses committed by Europeans over the centuries, but for Europeans from the allegedly guilty Chinese.

The truth is that China has been remarkably effective at stemming the spread of Covid-19, but has done so through a heady concoction of human rights abuses and authoritarian rule, of which no one should be envious. Human Rights Watch has reported censorship; dissenters put “under quarantine”; a disabled child left to die when his parent was forced into isolation; and a leukaemia sufferer turned away from hospital.

That doesn’t justify racism against Chinese people any more than the British should be stigmatised for the uniquely dodgy leadership we currently endure. This pandemic has exposed what many of us said about the Tories’ long boast of “record high” numbers of people in employment – namely, insecure workers with no rights and no safety net. Likewise, we warned about starving the NHS so that its resilience is shot, creating a generation of renters with no savings, and allowing homelessness and destitution to mushroom.

These casualties had already become the new normal. But once we see newly troubling scenes – people arrested for resisting isolation or treatment – we will be reminded why this could become a crisis of rights, as much as it is one of disease.
#Donald Trump  #COVID-19  #Covid  #Coronavirus  #Boris Johnson