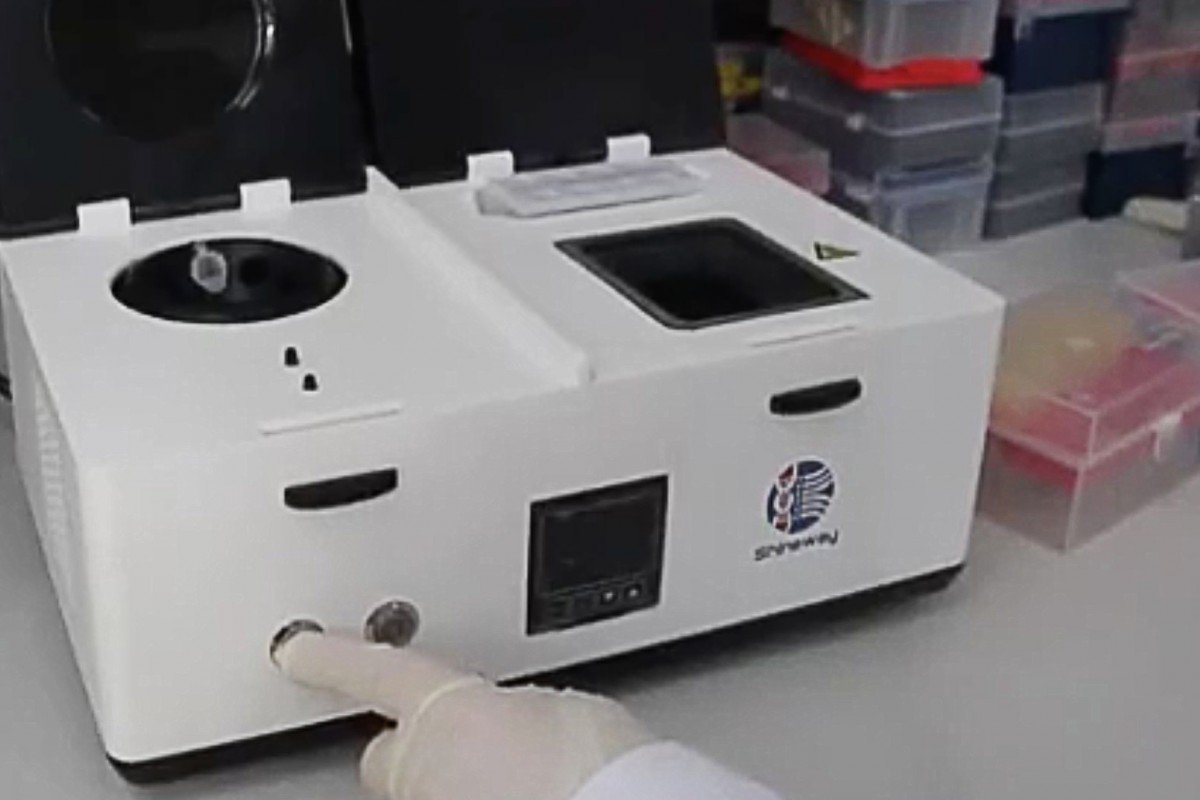 Scientists say the testing kit is cost-effective and portable, and has already been put to use in mainland China. Now they are working on getting the device onto the Hong Kong market

A group of Hong Kong researchers said on Thursday they had invented a cost-effective device for identifying the novel coronavirus in just 40 minutes.

The team, led by Weijia Wen, a physics professor at the Hong Kong University of Science and Technology, said the device – which inspects body fluid samples – could spot the coronavirus strain faster than ever before.

“The best thing is that it is fast and portable,” Wen said on Thursday.

The device is already in use in two cities in mainland China, and at least one set is being sent to Hubei province, the source of the outbreak, he said.

“We’ve sent it to many places, and hope people can use it,” he said.

The breakthrough comes as experts warn of a testing-kit shortage on the mainland, where by Thursday afternoon more than 28,000 patients had been infected and 563 had died. Those tallies could be underestimates because of a lack of available kits, experts say.

Wen said his team, drawing on resources from his start-up laboratory in Shenzhen, stepped in last month to try making a testing kit.

Traditional detecting devices in labs take anywhere from 90 minutes to three hours to identify the strain, owing to a slower heating method in the process of examining DNA, known as Polymerase Chain Reaction (PCR).

The PCR heating method is also used in the tests by Hong Kong’s Centre for Health Protection, which take about three hours to complete.

Using a different method that can quickly raise temperatures to the level required, Wen said, his team started working after receiving a coronavirus sample from China’s Centre for Disease Control in Beijing on January 20.

Wen said the team had already had devices to detect cases of swine flu and bird flu; within a week, they were able to diagnose the coronavirus, too.

Gao Yibo, a visiting scholar who worked on the project, said the device is highly accurate as long as a sample is drawn correctly, and is designed to be used in places outside hospitals or laboratories.

“The equipment is as easy to operate as drawing a blood sample,” he said while demonstrating the procedure.

Researchers around the world are racing to devise new kits which can be made widely available and quicken the testing process, while Xinhua reported last week that regulators in China were speeding up efforts to approve new detection devices.

While Wen’s device was finding success on the mainland, the group was working on getting the device onto the Hong Kong market, he said.

“There’s no good channel to connect with hospitals right now,” he said.

Hong Kong authorities had by Thursday night identified at least 24 patients infected with the coronavirus, with one fatality.

The city’s Centre for Health Protection said in a statement that it had enough test kits, using the PCR heating method, for more than 20,000 specimens, adding that it planned on “stocking up further”.

“[Our lab] will regularly review and improve the testing method for novel coronavirus based on [the] latest scientific evidence,” it said.