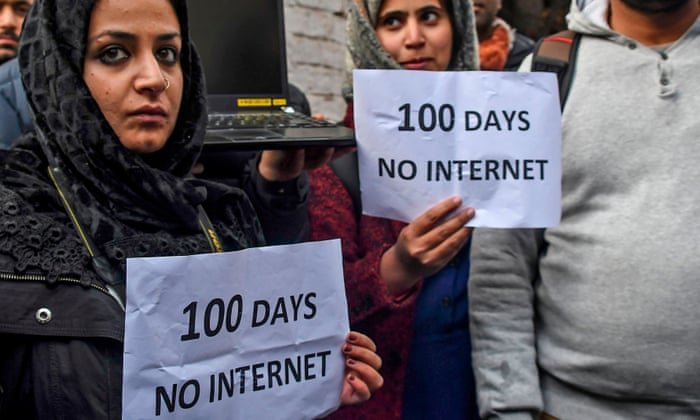 The Guardian view on internet censorship: when access is denied

Over the holiday period the Guardian’s leader column examines the challenges of the future by fathoming out the present. Today we look at growing efforts to restrict internet access

For a long time, the seductive promise of the internet was of expanding horizons. Individual users would reach out, discovering new friends and new prospects. Nation would speak unto nation. That dream was not unfounded, but it was always an incomplete account, and the sceptics are increasingly being proved right. We are entering an age when what defines the internet may be not expansion but contraction; while the number of its users continues to grow, the imaginative and discursive space it offers is under threat. That space is constrained not only by tech firms’ decisions and customers’ choices, but by the diktat of governments.

Look to a new record set by India at the end of the year. In mid-December, the internet shutdown in Kashmir – one of several in the country – became the longest ever imposed in a democracy. The government celebrated with restrictions in Delhi, too. India’s actions put it in bad but plentiful company. The year began with a 20-day shutdown in the Democratic Republic of the Congo. Sudan, Zimbabwe and Iraq are among those who followed due to protests. (Ethiopia cut off access for fear of cheating in exams, as well as following the assassinations of officials.) The effect was not only to prevent information coming in, or circulating internally, but to hinder news getting out. Access Now, an advocacy group dedicated to a free and open internet, says that shutdowns – sometimes targeting specific services, or throttling bandwidth rather than totally closing down access – leapt from 75 in 2016 to 196 in 2018. Last year’s tally, still being finalised, will show another rise.

Shutdowns are the most blunt and conspicuous aspect of internet restrictions. Other methods range from “fake news” laws in Singapore and Myanmar to the blocking of particular platforms. The US NGO Freedom House has recorded declines in net freedom eight years in a row. In part, of course, censorship is rising because internet use is increasing. More than half the world is now online. Communities have found new sources of information and opinion, and a new way to magnify their voices. Some of the governments spending billions to get their peoples online are simultaneously finding ways to deny them access. The global tilt towards authoritarianism is another critical factor, and has helped drive demand for sophisticated censorship technologies. Leaders seeking to expand their traditional information controls (arresting journalists; closing printing presses) into the new realm are also taking cues from each other; when Benin shut down access last year, it followed the regional examples of Togo and the Gambia.

No country has done more to encourage the spread of internet restrictions than China, which has developed the world’s most sophisticated and wide-reaching censorship system, comprising internal controls, the Great Firewall blocking external services and, say researchers, the Great Cannon, a tool for DDoS attacks that overwhelm their targets with traffic. Though Beijing, too, has used shutdowns, for the most part it has ensured that it does not need to do so. Five years ago, Iran announced that China would help to develop its “national information network” and ensure “safe and healthy domestic services”. In November, during widespread protests, it managed to cut users off from the global internet while internal networks functioned relatively normally. Russia announced last month that it had completed tests to check that its internet services would work if the country were cut off from the world wide web. It follows a “sovereign internet” bill which substantially increases the government’s control, stating that all internal traffic should be carried within the country’s own networks, with other traffic going through registered exchange points.

There are economic benefits to persuading other countries to buy censorship technologies, as there are in making it hard or impossible for users to access foreign services, pushing them towards domestic rivals. But this is not just a commercial endeavour. Xi Jinping wants to transform China into a “cyber superpower”, touting the country’s regime as “a new option for other countries and nations that want to speed up their development while preserving their independence”. China is exporting not only its technology but its laws and skills, normalising its censorship practices. It has invited dozens of countries to seminars on legislation and policy. Freedom House has noted that soon after officials took such training, Vietnam introduced a cybersecurity law mimicking China’s own.

Tellingly, the Chinese state-run People’s Daily Online welcomed India’s internet shutdown in Assam and Meghalaya last month. A commentary on the website suggested that this had “once again proved that the necessary regulation of the internet is a reasonable choice of sovereign countries based on national interests, and a natural extension of national sovereignty in cyberspace”.

It’s true that democracies – even those far more liberal than Narendra Modi’s India – set limits upon what can be published, sometimes wrongly. But they tend to restrict far less material than autocracies, and the distinction is qualitative too. There is an obvious difference between banning images of child sexual abuse, and barring any criticism of political leaders. There is also a profound difference between a clear and transparent set of specific rules which can be challenged in independent courts and changed by a democratically elected legislature, and vague injunctions applied arbitrarily and behind a veil. In China, censorship decisions are themselves secret.

The most challenging issue may be how to respond when services are used to incite hatred and violence. Myanmar, Bangladesh, India and other places have experienced the deadly real-world effects of lies spreading at previously unimaginable speed online. Yet each claim that restrictions are needed to protect the public must be scrutinised; unscrupulous governments too often abuse them.

Even in immediate crises, closing off services can leave potential victims vulnerable and the information vacuum can magnify distrust. A better way forward is regulation which obliges tech companies to live up to their responsibilities. Introducing friction may be appropriate where prohibition is not. WhatsApp limited how many times a message can be forwarded after the viral spread of false rumours about child abduction led to lynchings in India.

Where internet restrictions are needed, they must be both proportionate and transparent. Information matters. If it didn’t, autocrats would not be so anxious to control its flow. And the people they rule would not keep finding ways to circumvent those restrictions.