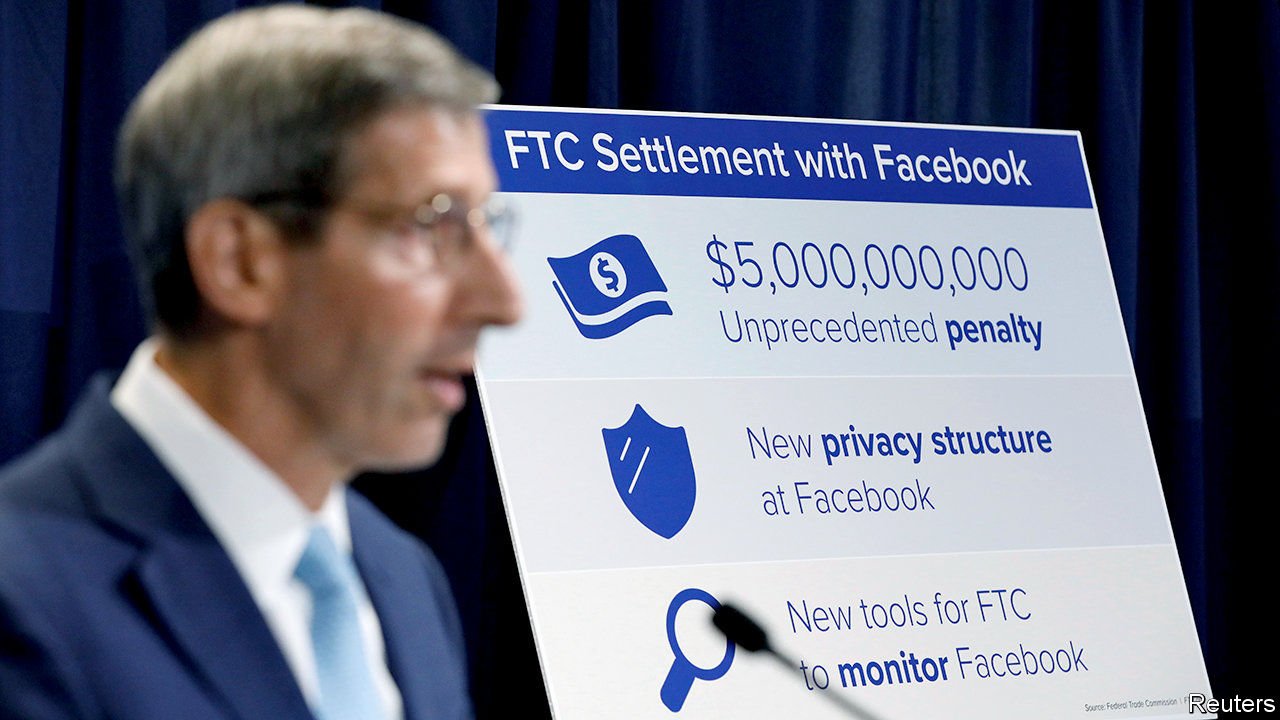 After years during which tech’s titans could do no wrong, they are now being pulled into a vortex of regulatory woes that make headlines almost daily. Big Tech is not about to implode. But will it come out intact?

The latest burst of antitrust activity came on July 24th, when Facebook said that the Federal Trade Commission (FTC), an American regulatory agency, had launched an investigation into the company. The news came soon after the FTC released details of a much-anticipated privacy settlement with the firm.

The social network will pay a $5bn fine for violating a previous privacy deal with the FTC. But Facebook also agreed to formalise its privacy processes, for instance by creating a special committee on its board and by designating compliance officers. Its boss, Mark Zuckerberg, will also have to certify the firm’s compliance—which could make him personally liable should Facebook fail to get its act together.

A day earlier, America’s Department of Justice announced that it would look into how big online platforms have achieved market power and whether they abuse it. The DoJ did not say which firms it had in mind, but Google is likely to be one. The department’s lawyers are reportedly already preparing to investigate it.

Trustbusters on the other side of the Atlantic—who have already fined Google more than €8.2bn ($9.3bn) in recent years—are not resting on their laurels. On July 17th Margrethe Vestager, the European Union’s competition regulator, announced that her department had opened an investigation into whether Amazon uses the data it collects from merchants’ sales on its sites to push its own products. Insiders expect the EU’s next target will be Apple, which stands accused of using its control of the app store on its iPhones to favour its own services, mainly Apple Music.

All this suggests that the tech titans are in trouble both in Europe and America. Some Democrats hoping to run for the presidency have called for their break-up. William Barr, a lawyer for media and telecoms firms who became attorney-general in February, has spent years fighting them. At his confirmation hearings he agreed with a senator who said that “dominant Silicon Valley firms could use their market power...to discriminate against rival products, services or viewpoints.”

This last point in particular worries Republicans. They view these giants as liberal bastions, which will discriminate against right-wing views in efforts to rid their platforms of extreme and hateful content. This month President Donald Trump held a “Social Media Summit” where right-wing bloggers aired their grievances. In a sign of how far critics will go, Peter Thiel, a successful tech investor and sometime defender of Mr Trump, recently speculated that Google had been “infiltrated” by Chinese intelligence services (despite a Trump tweet promising to “take a look”, his administration later dismissed the idea).

Whether these are just acts of intimidation ahead of presidential elections next year remains to be seen. If Facebook’s settlement with the FTC is any guide, Big Tech could still emerge mostly unscathed. The large fine and its new privacy bureaucracy notwithstanding, Facebook does not have to change its data-collection practices and is off the hook for any more claims that it violated the previous FTC settlement.

In a twist, Microsoft, the world’s most valuable listed firm, with a market capitalisation of over $1trn, has hardly been touched by the techlash. It has learned hard lessons from going through the regulatory wringer at the turn of the century: look beyond the cash cow (Windows); rapaciousness ultimately does not pay; and work with regulators. Another Hemingway quote is less well-known among geeks: “The world breaks everyone and afterward many are strong at the broken places.”