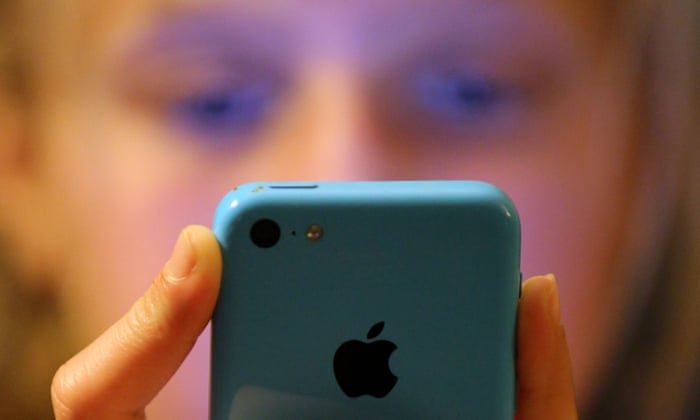 Critics say children are being given police records for behaviour they do not fully understand
More than 6,000 children under 14 have been investigated by police for sexting offences in the past three years, including more than 300 of primary school age, the Guardian has learned.

Figures disclosed by 27 police forces in England and Wales revealed 306 cases of children under 10, including some as young as four, being investigated on suspicion of taking or sharing indecent images of themselves or other minors since 2017.

They were among 6,499 cases of children under 14 investigated for such offences between 1 January 2017 and 21 August 2019, according to data disclosed to the Guardian under the Freedom of Information Act.

While the detail behind many of the investigations is unknown, a significant number are believed to involve the growing phenomenon of sexting – consensually sending and receiving explicit messages.

Consensual sexting among teenagers has been decriminalised in some countries, including parts of Australia and the US, but it is a crime in England and Wales under legislation introduced 41 years ago. It is illegal for anyone to take, make or share indecent images of children under the 1978 Protection of Children Act – even if the image is self-generated and shared consensually.

The number of children coming to the attention of police for sexting has prompted alarm from academics and charities. The data showed a steep rise in police investigations around sexting, from 183 a month in 2017 to 241 so far this year.

Prof Andy Phippen, whose research 10 years ago found that 40% of children aged 14 to 16 knew peers who engaged in sexting, said the law was “utterly unfit for purpose” and that it was “appalling” that so many children were being classified as suspects.

“The entire debate in 1978, when this legislation was introduced, was around protecting children from child sexual exploitation and now it’s being used to prosecute children,” he said.

Among the 306 investigations into children aged nine and under, 17 were aged six, nine were five years old and four were just four years old. These 306 children were classified as suspects on police databases despite being under the age of criminal responsibility, meaning no action could be taken against them.

One case involved a nine-year-old girl who was investigated by Leicestershire police for sending a naked selfie to another child. In this case it is understood that safeguarding checks were made on the girl, yet she was still named as a suspect on the police system.

Only 30 of 6,499 cases resulted in a charge, caution or summons for the child, with the vast majority of investigations dropped because the police decided it would not be in the public interest to take formal action – a decision usually taken when the sexting is consensual.

Fresh guidance was introduced in 2016 to address the trend of sexting, allowing police to close investigations where the messaging is considered non-abusive and there is no evidence of exploitation, grooming, profit motive, malicious intent or persistent behaviour.

Such cases are recorded as outcome 21, which allows police to list a crime as having happened but for no formal criminal justice action to be taken. Of the 6,499 cases involving under-14s, the overwhelming majority were classed as outcome 21.

Simon Bailey, the chief constable of Norfolk constabulary and the national police lead for child protection, said safeguarding was the primary focus of investigations into sexting.

He said: “We will not criminalise children unnecessarily and saddle them with a criminal record when the evidence suggests the sharing of images was consensual, but legislation and crime recording standards require officers to record that a crime has happened. We continue to review our response, including when to name someone as a suspect, victim or witness.”

A national policing review is under way into the ethics of recording children as suspects in certain crimes, including sexting. There is also an eagerness among some police child protection officers for a change to be made in law to create a distinction for consensual sexting, as is the case in parts of the US and Australia. Currently, all reports of “youth-produced indecent images” must be recorded as a crime in line with Home Office counting rules, notwithstanding the age of the child.

The legal charity Just for Kid’s Law described the findings as “deeply worrying” and said children were being given police records for behaviour they do not fully understand, and in circumstances in which the child should be treated as a victim not a suspect.

Jennifer Twite, the charity’s head of strategic litigation who also works as a youth justice barrister, said: “Police records should never be made for children under 10 since they are below the age of criminal responsibility and should never be criminalised.”

Children’s lawyers and academics argue that even when an investigation does not result in a charge or caution it could still be disclosed to future employers under an enhanced DBS check. The decision about whether to disclose non-conviction information is taken by a senior police officer in each force.

However, the police insist that cases that do not result in formal action will almost never be disclosed and would only be disclosed if there was a pattern of repeat offending or other aggravating factors.

Bailey said: “Chief constables have discretion over what is released during an enhanced background check and if this was an isolated incident without aggravating factors the chance of disclosure is extremely low and highly unlikely.”