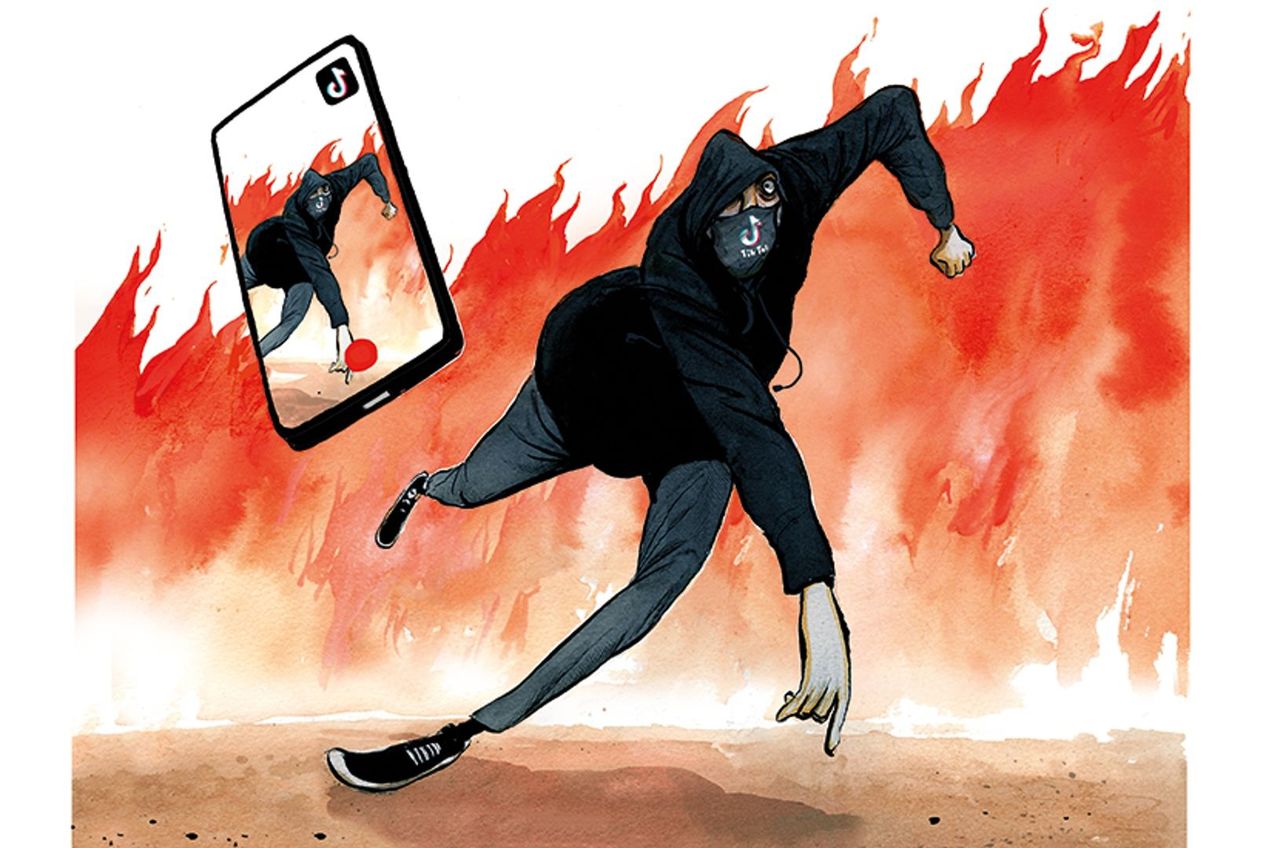 TikTok intifada: the role of new media in old conflicts

Social media is not the source of our conflicts, nor of our polarisation. But it’s striking in its ability to energise. People who were previously indifferent to — or even un-aware of — an issue can become willing to take to the streets. The traditional, nuanced reporting that might grace the News at Ten was never without its issues when it comes to coverage of an issue like Israel/Palestine, but there would at least be an attempt to try to reflect the historical context and the rival explanations of the different sides.
In Israel last month, a video on the social media platform TikTok encouraged users to film themselves assaulting Orthodox Jews. That video became a spark that ignited outrage across the country. A band of Jewish extremists, Lehava, organised a march in response. They clashed with Arab groups at Damascus Gate. In a situation that was already a tinderbox, things escalated from there.

Why did it happen? Why would any ordinary person get pleasure from assault? ‘There is a competition for likes and views,’ a 15-year-old victim told an Israeli news organisation. ‘A video of an Arab slapping an ultra-Orthodox man will get you both.’ A violent riot set off by teenage longing for likes. Welcome to the TikTokisation of global politics.

The genius of a social media algorithm is to find out what you like and give you more of it. YouTube brought videos. Facebook and Instagram brought photos. Twitter added argument and then soon ended up exerting a powerful hold over traditional media. But the big entrant in the past few years has been TikTok, which combines all of those elements in arguably the most addictive format yet.

The Chinese-owned social media platform has about 730 million users worldwide, of whom an estimated ten million are in Britain. To its fans, it’s a harmless stream of silliness. To critics, it’s an inferno of narcissistic rubbish. In just a few minutes, a user can watch everything from inspirational baking recipe videos and make-up tutorials to viral challenge clips — in the vein of the famous ice bucket challenge, which raised more than £150 million worldwide for motor neurone disease. But as the Israeli video shows, it’s not all so wholesome.

It’s not that violent clashes in Jerusalem are anything new. The difference today is that any one incident is far more likely to be filmed, uploaded and shared to millions within a matter of minutes. This has a radicalising effect, especially since clips can be edited to inflame passions. Last week, a video circulated of an Israeli car being stoned — then the driver ramming the crowd. The clip went viral in Gaza. At the same time, outrage in Israel was stoked by a film of a Jewish man being beaten up and ending up in hospital.

‘Everyone is calling it the TikTok intifada,’ Dr Tehilla Shwartz Altshuler, a senior fellow at the Israel Democracy Institute, said last month. ‘We are only seeing the tip of the iceberg.’ Her point was that TikTok videos are at least visible. The Jewish youth are more likely to use WhatsApp, which is private (and often impenetrable even to intelligence services), so it is harder to know what is being shared. But the trend is well understood: filming and sharing violent videos accelerates conflicts. And it’s never been easier to film or share.

Today, social media users across the world can’t browse their feeds without seeing the latest footage from Israel and Gaza, with none of the balance that a broad-caster would attempt. The videos in circulation tend to be the most shocking: vigilante mobs assaulting people; thousands of Hamas rockets fired into Israel; an IDF bombing campaign that has left hundreds dead, many of them children, and flattened homes, media offices and more.

Then there’s the commentary. Straight after being shown a video, TikTok users can see young people giving their 60--second opinion — and very often using words such as ‘genocide’ and ‘ethnic cleansing’. Users are persuaded to like, share and repost, or even take to the streets, which might have contributed to the large, seemingly spontaneous Free Palestine protests in several European cities last weekend. Platforms such as TikTok tend to exacerbate the human tendency to divide the world into ‘good’ and ‘evil’, which makes peaceful resolutions to complex conflicts even harder, and further provocations even easier. Actual wars join the online culture wars.

Only a few years ago, many of us thought social media’s ability to connect and mobilise people in the real world would help to topple autocracies and be an unequivocal good. The 2011 Arab Spring protests — some of which became revolutions, others civil wars — were facilitated by the power of Twitter and Facebook. The new technology made it harder to censor and suppress mass movements.

In reality, the role of social media was overstated — after all, Libyans did a bit more than ‘unfriend’ Colonel Gaddafi. But it did help protestors coordinate. International hacking groups intervened to help keep the internet online in Egypt as the government tried to shut it down. The internet, the optimistic among us came to believe, was fulfilling its promise as a democratising force. Writers like me predicted that the next decade would see further liberalisation as a result. It’s clear now that we were wrong.

The ways in which social media can divide us have been much documented across a decade. We already know how extreme content is most likely to go viral, with the most hardline, cruel or stupid comments getting the most ‘likes’ and ‘shares’. Online crowds are willing to cheer you on as you get more extreme. Some thoughtful politicians adopt an angrier persona on Twitter, since outrage itself has become a new language and a powerful means of political communication.

YouTube’s recommendation algorithm has become notorious for driving people down rabbit holes, helping them radicalise themselves one video at a time. So you end up with a situation where an idle search for ‘Is the world flat?’ would lead within minutes to full-blown conspiracy videos explaining why the Jews needed you to believe the myth of a round world.

As the largest social network, Facebook has taken perhaps the largest share of the flak: it has been linked to everything from copycat suicides — broadcast live — and Donald Trump’s electoral victory to inspiring deadly attacks on minority groups, again streamed to a live global audience.

The QAnon theory — that Hillary Clinton is at the helm of a Satanic paedo-phile ring which Trump is fighting to unmask — inspired a lone man to turn up at the Hoover Dam with a rifle and a truck full of ammunition. Months later, it inspired #SaveTheChildren protests across the world, including dozens in the UK. And it undoubtedly caused the storming of Capitol Hill in January.

Social media is not the source of our conflicts, nor of our polarisation. But it’s striking in its ability to energise. People who were previously indifferent to — or even un-aware of — an issue can become willing to take to the streets. The traditional, nuanced reporting that might grace the News at Ten was never without its issues when it comes to coverage of an issue like Israel/Palestine, but there would at least be an attempt to try to reflect the historical context and the rival explanations of the different sides.

The effects of this are easier to see when the fuss is more trivial. The New York Times this week documented the fury generated by a Facebook group made up of former contestants of the long-running US quiz show Jeopardy. A contestant had been seen holding up three fingers when his third win on the show was announced. The group quickly decided the gesture was, in fact, a white power symbol — and soon nearly 600 of them had signed an open letter condemning the show for allowing it to be broadcast.

The theory had its problems: the contestant had held up one finger after his first victory, and two after his second, to little controversy. And the Anti-Defamation League issued a statement saying the hand gesture was not a white power symbol. Nonetheless, the Facebook group held firm in its views: why was the episode broadcast? And why was the ADL ‘gaslighting’ them? Once you’re in these febrile circles, every online issue is actually about something else — something serious enough to be worth getting angry about.

Looming over all of this is the question of who benefits. By and large we tend to suspect Facebook et al let the algorithms tear us apart because they generate tens of billions a year in profit. Jack Dorsey, who runs Twitter, was asked last year if he thought social media was stirring up needless trouble. ‘Isn’t more attention on those problems helpful?’ he argued. ‘Some people — who may not have had access because they didn’t understand it in the past — now understand it. And can jump in.’

What is to be done? There’s plenty of talk in Washington and Brussels about stepping in to calm things down. But this can all too often mean regulating political speech — wanting to restrict the ability of people to express opposing views. That’s regulating the populace, not the tech giants. It would be better to have some algorithmic accountability. These are powerful machines; we need to know how they work. When Twitter decided to ban Trump, the company was expected to explain its decision. If TikTok is prioritising one type of political message over another, it’s important to know what and why.

You can’t opt out of the politicisation of social media. To be visibly Jewish online is to be bombarded by demands to explain or condemn Israel. To be visibly Muslim is to be similarly vulnerable to a torrent of abuse. Any app that presents news (or videos or commentary about current affairs) can be accused of bias.

The response to the risks of social media can easily tip from rational concern into a moral panic. Mass communication always triggers angry reaction — as it did in the time of Martin Luther and the invention of the printing press. TikTok is unlikely to lead to the unravelling of society, but the days of broad trust in the news are over. We are beginning to understand the consequences.
#Donald Trump  #Facebook