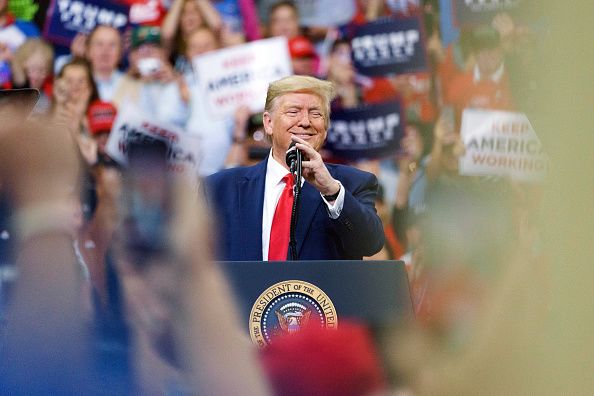 Trump broadcast his first live event on Twitch from Minneapolis on Thursday evening, and it was viewed by more than 30,000 people.

Trump’s Twitch account has links to donate or to learn more about his campaign.

Trump has publicly criticized Amazon and its CEO Jeff Bezos.

President Donald Trump is now on Twitch, Amazon’s live-streaming platform that initially launched as a place for gamers to interact with audiences in real time.

Trump broadcast his first live event on Twitch from Minneapolis on Thursday evening, and it was viewed by more than 30,000 people. His account had more than 42,000 followers as of Friday morning and has several links that invite people to shop his store, volunteer or donate to his campaign.

Trump has long feuded with Amazon and its CEO Jeff Bezos, who also owns The Washington Post.

In a November interview with Axios, Trump said his administration was looking into antitrust violations by Amazon, Facebook and Alphabet. Trump has also criticized Amazon for paying “little or no taxes” and has accused The Washington Post as being a “lobbyist” for Amazon.

″I have stated my concerns with Amazon long before the Election,” Trump said on Twitter in March 2018. “Unlike others, they pay little or no taxes to state & local governments, use our Postal System as their Delivery Boy (causing tremendous loss to the U.S.), and are putting many thousands of retailers out of business!”

The White House declined to comment. Press representatives for Trump’s campaign were not immediately available to comment.

Twitch is supported by ads and generates revenue from viewers in several different ways. Twitch Prime, which includes emoji, costs $4.99/month but is free for Amazon Prime subscribers. Twitch Turbo costs $8.99 per month and has fewer advertisements and additional aesthetic features. And Twitch Chat lets people buy “bits” that they can use to cheer on and tip broadcasters. 100 bits costs $1.40. That feature doesn’t appear to have been active during the broadcast.

Some of the comments running alongside Trump’s stream were deemed inappropriate and have been removed by Twitch moderators.

Twitch was in the news earlier this week after Amazon said the platform was used by a gunman in Germany to livestream his shooting spree, which killed two people after he failed to gain entrance to a synagogue on Yom Kippur. The video was seen by about 2,200 people before it was pulled from the service.