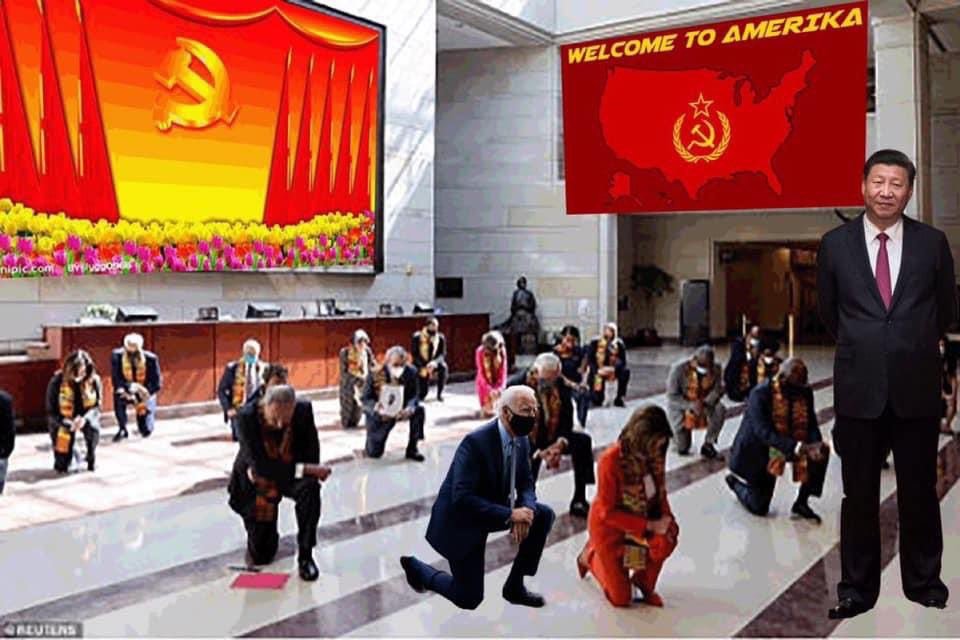 Chinese pundits and academics call Trump’s social media ban a cautionary tale as the country cracks down on Big Tech.
The widespread deplatforming of US President Donald Trump from multiple social media platforms has sent shock waves around the world amid intensifying debate over the power and role of Big Tech in everyday life. Since the deadly storming of the US Capitol last week, Trump has been permanently banned from using Twitter, indefinitely banned on Facebook and Instagram and, as of Tuesday evening, suspended from YouTube for a week.

Online reactions in China to Trump’s ban from social media platforms have been mixed. Many were shocked that US platforms had the audacity to silence the country’s president. Some were relieved that Trump was being punished. Others have taken a more sympathetic stance, relating Trump’s predicament to their own experiences of being banned from social platforms.

But state-owned media commentators and academics are increasingly weighing in, painting the ban as a cautionary tale of social media platforms wielding too much power. Many also claim that the ban hypocritically goes against US advocacy of free speech.

The commentary comes amid an ongoing regulatory crackdown aimed at Chinese tech giants, a firestorm first touched off in November when the Chinese government halted the initial public offering of Ant Group and then initiated an investigation last month into Ant affiliate Alibaba Group Holding, China’s largest e-commerce company and owner of the South China Morning Post.

Mei Xinyu, a researcher at the China’s Ministry of Commerce, expressed concerns over the potential for freewheeling tech platforms to pose a political threat to the country.

“The behaviour of these social media platforms has raised panic in other countries,” Mei said. “Tech companies in China have to make a positive impact. We won’t restrain ourselves economically. But in terms of political risks, we can’t allow this to happen in China.”

Wang Sixin, a professor from the Communication University of China, echoed those sentiments.

“This incident of a group of tech giants conspiring to choke off Trump is a cautionary lesson for our own regulations,” Wang said. “Put differently, we must not let these internet companies, especially the alliance of them, achieve an information monopoly.”

In a viral Weibo post, Hu Xijin, editor of the nationalist tabloid Global Times, said that China should uphold its own regulatory standards and principles for guiding the internet, independent of how the US government or companies act.

“The freedom of speech is constrained by boundaries. That has long been our understanding,” Hu wrote. “The US used to deny China’s interpretation of freedom of speech, but now [Americans] have shown their true colour. They have admitted the fact that their society does impose constraints on free speech.”

Influential blogger Ren Yi also weighed in under his pen name Tuzhuxi. He called Trump’s ban from social media an example of “free speech as controlled by big capitalists and corporations”.

Other scholars warn that Big Tech’s curbing of Trump’s reach to his supporters should not be conflated with censorship, as many in China assert.

“The context of government control of internet content is very different between the US and China. In the US, the focus is on dissemination of false information that might lead to violent acts or the spreading of diseases,” said Victor Shih, an associate professor at the University of California, San Diego‘s School of Global Policy and Strategy.

“In China, the government already has wide-ranging power to filter out content on the internet. I am not sure how much more control it can exert on internet platforms without reducing them to state media,” he added.

While debates about free speech online can be found around the world, deplatforming from China’s internet services can have severe consequences. Apps like WeChat have become such an essential part of daily life in China that being cut off could mean losing access to many important services both online and offline. It also means losing touch with friends and family.

In August 2020, a man fell to his death from Tencent’s customer service building in Shenzhen after unsuccessfully trying to get a WeChat ban repealed, Chinese business media Caixin reported at the time.

Lin Yi, a Wuhan native, said one of her Weibo accounts was suspended in March last year after she reposted content about Li Wenliang, a whistle-blower doctor who died of Covid-19. The post called for freedom of speech.

She tried complaining to Weibo’s customer service for a month, but no one responded. Lin said she eventually gave up on that account and registered two new ones as backups. She now self-censors when using her new accounts, she said.

“My biggest demand for regulating Big Tech in China would be less censorship, but that’s not going to happen,” Lin told the Post.

“For WeChat, if your account gets suspended, the negative impact on your life is huge. I’d want potential regulations to require WeChat to warn users first, before doing suspensions,” Lin said.

Jyh-an Lee, a law professor at the Chinese University of Hong Kong who researches internet law, said that services such as mobile payments that are provided by technology giants have become almost like a utility in China, leaving people with no choice to opt out. This has made the companies a target for regulation as the government looks to protect consumers and strengthen political control.

“What makes this technology particularly valuable is that people have no choice. There’s no way for you to live without Alipay or WeChat Pay. That is a way that government regulates private behaviour, through hi-tech companies,” Lee told the Post.

“Every move you make online is actually monitored, documented and recorded. That’s why data has become important,” he added. “Data is not only the fuel for the new economy, but I also think it’s an important resource for the government to exert stronger control over private activities.”

The Cybersecurity Administration in the northeastern city of Tianjin said that big data has become an important tool for governance, according to a report by the magazine Oriental Outlook published on Sunday. The agency said big data is as important as guns and pens, using a metaphor from former Chinese leader Mao Zedong, who used the items to refer to the military and propaganda as means of seizing and maintaining power.

With the ongoing antitrust investigation into Alibaba and the introduction of a raft of measures targeting internet companies over consumer data security and monopolistic practices, China’s tech companies will have little choice but to cooperate, according to Lee.

“I don’t think there is a choice to say no,” he said. “Usually, cooperation is much better than confrontation.”
#Alibaba  #Donald Trump  #COVID-19  #Covid  #Facebook  #ANT