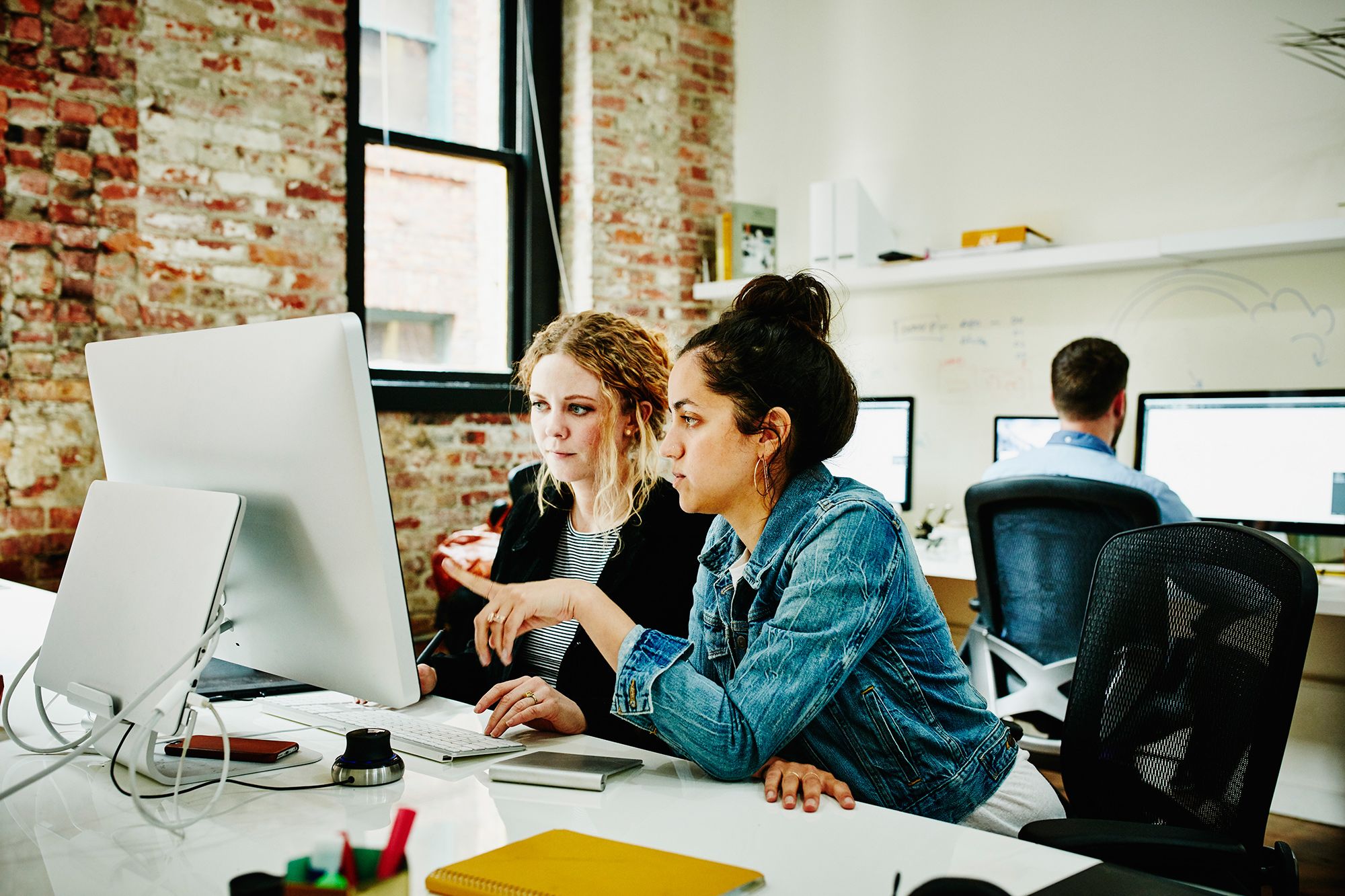 Turning the tables: Women in tech job interviews have questions of their own

Women interviewed at the Grace Hopper Celebration told NBC News they were intimately aware of the sexual scandals that plagued tech companies, as many of those businesses hoped to recruit from the conference.

Companies like Uber and Palantir have been banned from the conference for past scandals.

Catherine Tan, a senior at UCLA, said she learned a lot last summer while interning at Tumblr, a social networking site that’s in the midst of big changes. She developed her skills as a software engineer, and said she had a positive experience in the workplace, something that’s not always true for women in tech.

But she also learned other crucial bits of information - the names of a few other companies where she might avoid working in the future, as she and co-workers swapped what they knew about the latest misconduct allegations swirling around the scandal-plagued tech industry.

Just steps away, some of those reputations were being pressed on recruiters from about 300 companies that had all converged on the Orange County Convention Center in Orlando for the Grace Hopper Celebration - the largest conference of women in technology, which also doubles as a job market.

While they were organizing their resumes and doing last-minute preparation, many of the women who spoke with NBC News made clear that they also had plenty of questions for their potential employers, some of whom have made headlines for allegations of misconduct and sexism.

“People will say, ‘I don’t like the company,’” when word spreads about a bad culture, said Iris Nayki, a junior at the University of California, San Diego, who’s majoring in computer engineering. “I want to be somewhere where I’m safe and appreciated and respected.”

Named for a pioneer in computer science, the Grace Hopper Celebration is a crucial gathering point for the tech industry and seen as a test of how much progress Silicon Valley is making in shedding its long history of sexual harassment and gender discrimination.

The tech industry remains far from gender parity, and in interviews with NBC News, women in various stages of their careers said they were finding ways large and small to cooperate with one another and push back against male dominance. The thousands of young female workers who are entering the tech industry through channels like this one are taking lessons from the recent sexual misconduct scandals, and considering ways they can reshape the places they’ll work.

The effort was in full force last week as a record 26,000 people - the vast majority of them women and near college-age - gathered for the annual Hopper conference.

Grace Hopper, besides being bigger, is not like other tech conferences. The emphasis isn’t on hyping new products or striking business deals. It’s on job opportunities and networking, especially for students and other young women, as well as making the tech sector more welcoming.

“We will change the direction of tech together,” read a banner outside the conference.

Men do attend the conference, but they are a small minority. At least one of the men’s bathrooms was converted to gender-neutral for the week.

And conversations are different than at other conferences, offering a refuge from male-dominated spaces where women say they’re frequently interrupted or condescended to.

The conference has still had its share of male misstatements. At the 2014 gathering, Microsoft CEO Satya Nadella said during an on-stage interview that women don’t need to ask for raises and should put their trust in the system. He apologized the same day, saying he had learned a valuable lesson.

Since then, sexism and harassment that festered in the tech industry have become a widely reported crisis in parallel with the national #MeToo movement.

Google is battling a Labor Department lawsuit alleging that it systematically pays its female employees less than it pays its male workers, while the company has also paid tens of millions of dollars in exit packages to senior male executives accused of sexual misconduct, leading thousands of employees to walk off their jobs for a day in protest last year. In 2017, Uber’s then-CEO Travis Kalanick resigned after he was accused of allowing a workplace culture of harassment and discrimination against women.

Other tech executives and venture capitalists have left their firms after recent sexual misconduct allegations, reinforcing the perception that the tech industry is worse for women than even Wall Street.

AnitaB.org, the nonprofit that organizes the Hopper conference, has been aggressive in pushing for change, reflecting the growing activism among women in tech who have worked behind the scenes but have also begun to publicly advocate for change in their industry - and draw clear lines over what they will no longer tolerate.

After former Uber engineer Susan Fowler described a culture of sexual harassment and retaliation at the ride-hailing company in a February 2017 blog post - a turning point in the tech industry’s handling of gender issues - AnitaB.org banned the company from having an official presence at its event. This year, it banned the data-mining company Palantir over concerns about its commitment to social justice.

“The idea is to get that reassurance that you’re not alone,” said Thompson, who’s pursuing a career in software development.

Some job applicants could even recite from memory the details of recent tech scandals, showing the depth of impression that negative news stories have made on them.

In extreme examples, such as Uber and Palantir, companies may lose access to the Grace Hopper pipeline of talent.

Though individual employees of those companies may attend the gathering, and did so last week, according to the conference organizers, the companies are deprived of opportunities afforded sponsors, such as official job-interview space or a booth on the convention floor.

“It’s very important for us to ensure that the folks who are coming here to hire are exhibiting the same commitment” to diversity, equity and inclusion, said Michelle Flatt, AnitaB.org’s vice president of programs.

Last month, several Palantir executives wrote an open letter to AnitaB.org defending their company, including its work for U.S. Customs and Immigration Enforcement that has been criticized for targeting children and families. Palantir at one point tried to prevent the release of data about its gender diversity, going so far as to call the data a trade secret because its female employees might be hired away by competitors; numbers from 2015 eventually revealed that Palantir had no female executives and one female manager at the time.

Uber, which has been banned from the conference since 2017 because of the treatment of women employees, did not respond to a request for comment.

AnitaB.org has subtler ways of nudging companies to be better to women. It offers a confidential, full-day seminar to C-suite executives, with coaching on diversity.

And since 2011, the organization has published a report on “Top Companies for Women Technologists.” The report tracks data about the industry and also serves as a seal-of-approval for companies that agree to provide AnitaB.org with that data, such as information about pay and the number of women they employ.

Some 76 companies participated this year, including Amazon, IBM, Microsoft and Salesforce, and at last week’s conference, they were rewarded with a physical “top company” plaque placed at their convention booths.

But not all companies cooperate, and this year Apple, Facebook and Google were among those who declined to provide data to AnitaB.org. They also declined to give a reason to NBC News as to why, though they publish some of the data on their own.

Some companies don’t want to provide gender-related pay information to a nonprofit researcher because they’re facing litigation over the subject, Flatt said.

“Asking for data made people a little bit nervous,” she said, without naming specific companies.

AnitaB.org remains optimistic about where the tech industry is going, hoping for 50-50 parity by 2025 - a lofty goal, considering that its data has women at 25.1 percent of technology jobs this year.

Optimism, however, is still balanced by skepticism. Alina Petrova, a doctoral student in her final year at the University of Oxford, said she was asking potential employers for details about parental leave and other subjects, to see if their actions back up their words.

“The facade of the companies is always ‘to make the world a better place,’ but it’s a big show,” Petrova, 30, said. “In the end, it’s all about revenue.”