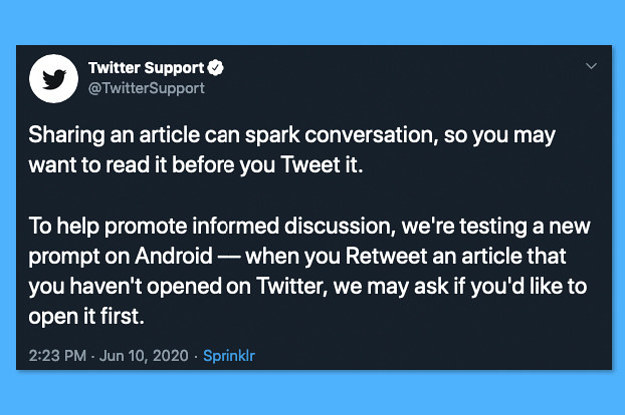 Twitter is rolling out a new feature for Android users prompting them to read an article before they share it, the company announced today.

Sharing an article can spark conversation, so you may want to read it before you Tweet it.

To help promote informed discussion, we're testing a new prompt on Android –– when you Retweet an article that you haven't opened on Twitter, we may ask if you'd like to open it first.

The company also said the experiment might run for at least a few weeks "to get enough data to make an informed decision on next steps.”

The prompt is triggered based on whether a person has clicked on the link, not how much time they've spent on a page.

According to that announcement, the feature is being tested “to help promote informed discussion.” The prompt will come up if a person tries to retweet an article that they haven’t clicked on.

It's easy for links/articles to go viral on Twitter. This can be powerful but sometimes dangerous, especially if people haven't read the content they're spreading. This feature (on Android for now) encourages people to read a linked article prior to Retweeting it. https://t.co/qdYZ8w9e27

One person on Twitter has already posted about seeing the new feature. “Headlines don’t tell the full story,” the pop-up said. “Want to read this before Retweeting?”

I did read it, actually 🤔 pic.twitter.com/sqikMwu0pV

The company has recently debuted a series of new initiatives to curb the amount of misinformation on its platform. It has labeled some tweets as false or misleading, including ones claiming 5G causes the coronavirus and several posts from President Donald Trump.

The move prompted workers at Facebook to criticize Mark Zuckerberg's approach to disinformation on his own social network.