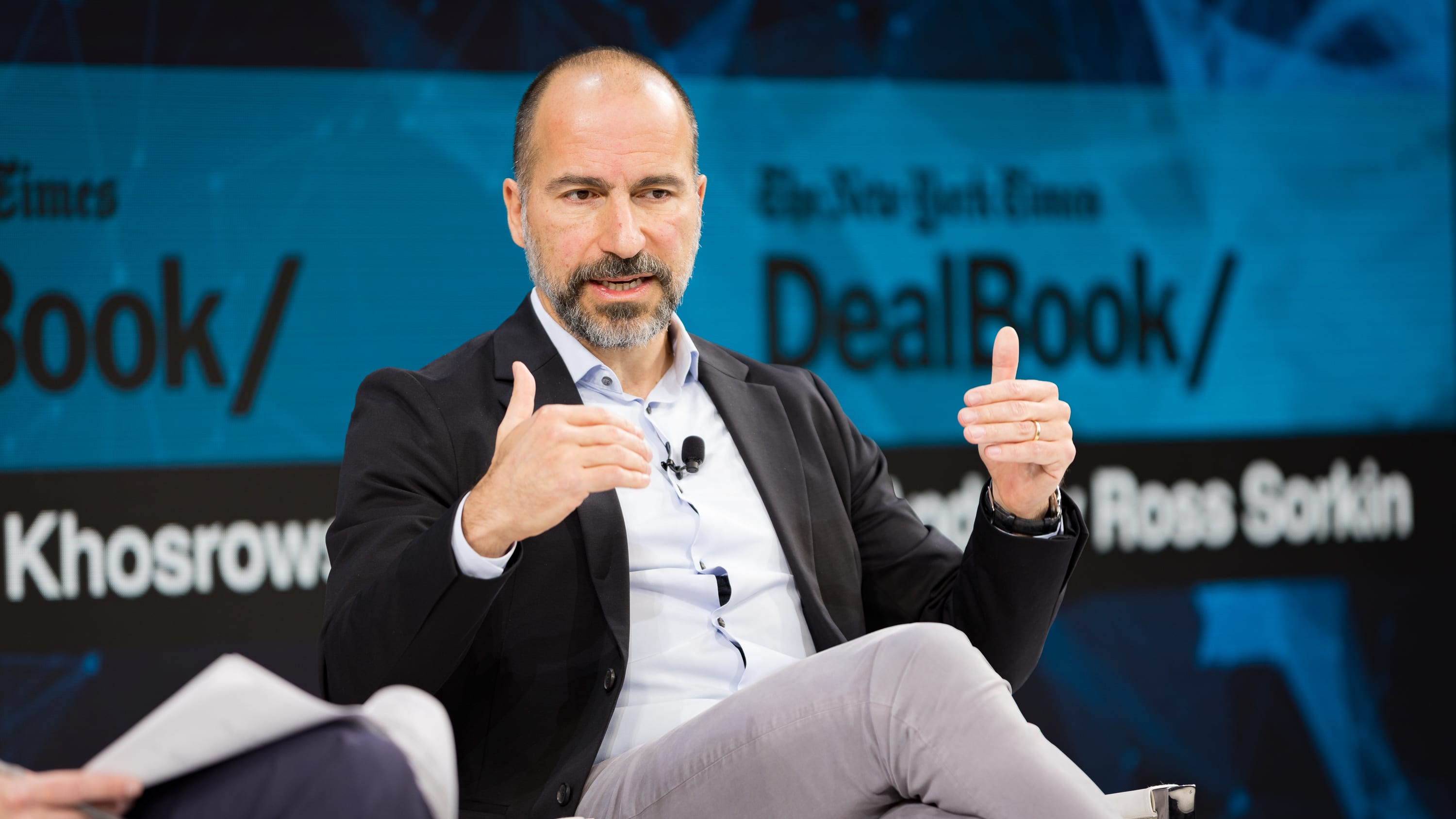 Uber CEO: 'We are very, very, very different from WeWork'

Uber CEO Dara Khosrowshahi defends the company’s business at The New York Times’ DealBook Conference on Wednesday. Khosrowshahi says Uber’s core ride-hailing business should shield it from experiencing a fate like WeWork’s. The stock has been under pressure recently as Uber’s post-IPO lockup is set to expire and it reported more than $1 billion in net losses during the third quarter.

Uber CEO Dara Khosrowshahi defended the ride-hailing company’s business Wednesday as its stock continues to tumble and it faces growing investor skepticism around its massive losses.

On stage at The New York Times DealBook conference, interviewer Andrew Ross Sorkin asked Khosrowshahi if he was happy the company had gone public in time to avoid a situation like WeWork’s. The embattled workspace company was once expected to stage one of the hottest initial public offerings of the year, but investors balked at its huge losses and unusual business structure. The company ultimately postponed its IPO and had to be bailed out by major investor SoftBank.

“We are very, very, very different from WeWork,” Khosrowshahi said. “Fundamentally the rideshare market is of scale, is global, is an attractive business, and it’s only going to get better in a competitive market.”

In fact, the companies share a number of similarities: Both count SoftBank as their largest investor, received early venture infusions from Benchmark Capital and show operating losses of more than $1 billion per year. Earlier on Tuesday, SoftBank, the Japanese conglomerate headed by Masayoshi Son, reported quarterly losses of $6.5 billion, driven in large part by writedowns on its Vision Fund’s investments in both companies.

On stage, Khosrowshahi acknowledged that Uber has felt the effects of a reckoning among public and private investors, wherein the “appetite for the unknown and high risk has gone down.” But he said it has “forced Uber to perform better,” as evidenced by the company’s announcement that it expects to turn an EBITDA profit in 2021, as well as an increasingly rational ride-hailing market.

He added that the core ride-hailing business essentially functions as Uber’s version of Amazon Web Services, which has become a major profit engine for Amazon, and should help Uber achieve profitability.

Khosrowshahi’s comments come as Uber’s IPO lockup agreement is set to expire on Wednesday. The event is the first time since Uber’s IPO in May that insiders can sell the stock, and analysts have warned it could put near-term pressure on the shares.

Earlier this week, Uber reported third-quarter earnings that sent the stock down nearly 10%. In its results, the company posted over $1 billion net losses for the quarter. On a call with analysts, executives dangled an attractive EBITDA profitability target for full year 2021, but many analysts continued to ask skeptical questions to probe for more details.