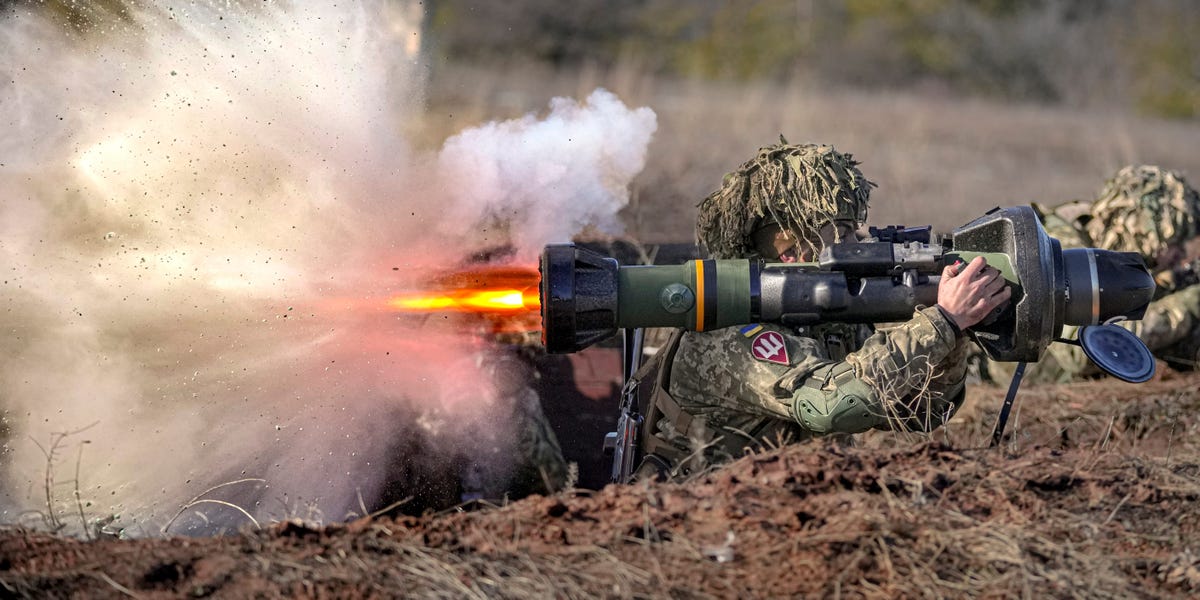 Ukraine has wrecked Russia's invasion plans, and these game-changing weapons have helped them do it

The US is the largest provider of security assistance for Ukraine, committing over $19 billion in military aid since Russia invaded in late February.

Throughout Russia's war in Ukraine, Western countries and NATO allies have outfitted Kyiv's forces with various weapons and combat systems to help them not only stop enemy forces from advancing but at times actually drive them back.

Among these weapons are shoulder-launched anti-tank weapons, unmanned combat aerial vehicles, and mobile rocket launchers — game-changing systems that have helped Ukraine derail Russian President Vladimir Putin's campaign, whether it was defending Kyiv in the early spring or keeping Russian forces at bay in eastern Ukraine over the summer.

The US is the largest provider of security assistance for Ukraine. According to a November 23 Pentagon assessment, the Biden administration has committed over $19 billion in military aid since Moscow invaded on February 24. The next-highest contributor is the UK, which has committed £2.3 billion ($2.7 billion) as of early November.

Additional sources of firepower committed to Ukraine include Germany, Turkey, Australia, and Canada, among others.

"There's been several weapons systems that Western security partners of Ukraine have provided that have played a crucial role," George Barros, an expert with Washington-based think tank Institute for the Study of War, told Insider. "If it were not for Western security assistance to Ukraine, Russia would've already won the war."

Here are some of the game-changing weapons that have helped Ukraine spoil Putin's invasion plans and even turn the tides of the war. 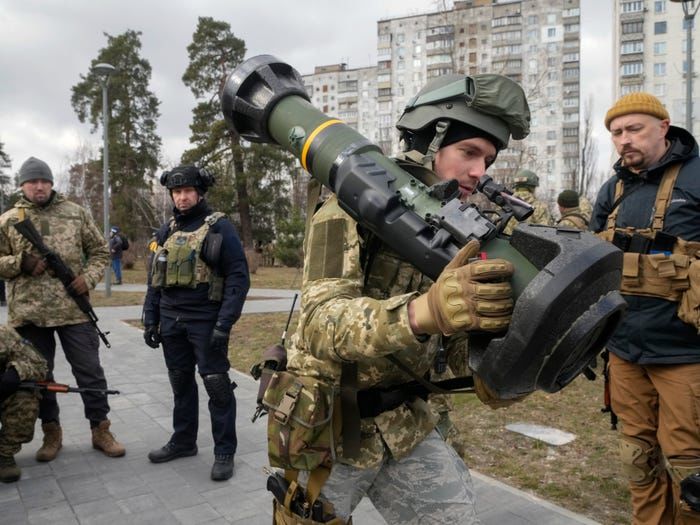 During the early stages of the war, invading Russian forces quickly advanced on the Ukrainian capital city, Kyiv, after Russia spent months of gathering troops and equipment along the border. In the face of stiff Ukrainian resistance, Putin's troops were, however, forced to withdraw from the region and refocus their efforts on eastern Ukraine.

In these early days and weeks, shoulder-launched anti-tank missiles — like the UK-provided Next Generation Light Anti-tank Weapon (NLAW) and US-provided FGM-148 Javelin — became crucial tools for Ukraine to defend against approaching armor and tanks.

These weapons were "very important to provide individual Ukrainian soldiers firepower to be able to defeat Russian armor as they were approaching during the initial phase of the invasion," Barros said.

The Pentagon estimates that Russia has lost half its main battle tanks in Ukraine.

Another important shoulder-launched weapon was the FIM-92 Stinger, which is an American-made portable air-defense system. These weapons, Barros said, were capable of downing Russian helicopters and aircraft conducting airborne assault operations.

Among some other systems, such as artillery systems, these three lightweight weapons helped Ukrainian forces defend Kyiv and other regions in the early days of the war. 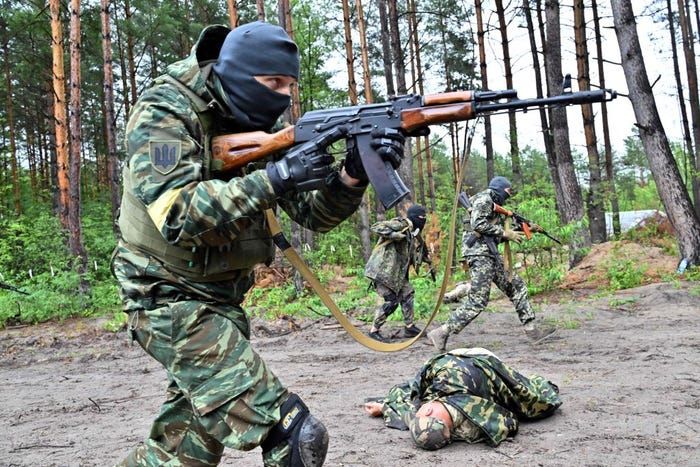 Fighters of the territorial defence unit, a support force to the regular Ukrainian army, take part in an exercise as part of the regular combat tactics classes, not far from the Ukrainian town of Bucha, Kyiv region on July 13, 2022 amid the Russian invasion of the country

Although they have received far less attention than some other weapon systems, certain small arms and their ammunition were critical for Ukraine early on in the war. These weapons were used to arm members of the Ukrainian armed forces and territorial defense units, as well as some civilians.

"It's not a sophisticated system or anything like that, and it's not uniformly standard, but that aid was very important during the initial phase of the invasion as well, because it was very unclear exactly how far the Russian invaders would get," Barros said.

According to a late-November Department of Defense fact sheet, the US had committed over 11,000 grenade launchers and small arms, as well as more than 104,000,000 rounds of small arms ammunition.

Kyiv's forces have used a variety of small arms, some from the West and some of alternative origin. These include rifles, submachine guns, light machine guns, sniper rifles, and handguns manufactured domestically and also abroad in Austria, Israel, and even Russia.

By contrast, many Russian reservists troops have arrived in Ukraine with what Western intelligence has called "barely usable" rifles. Some carry Soviet-era weaponry, which Britain's defense ministry previously said was kept in poor storage conditions. 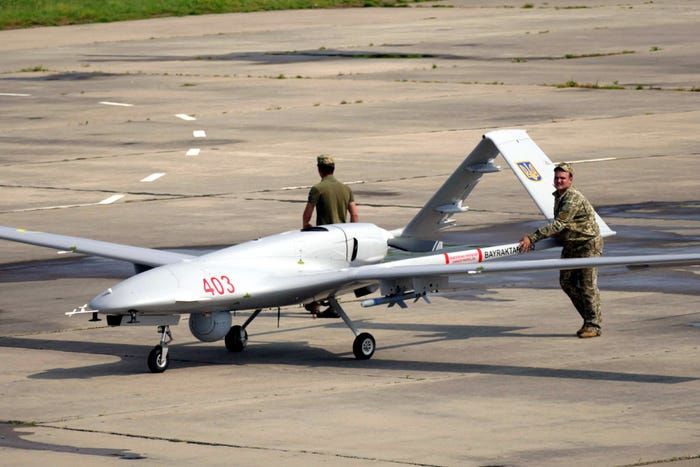 As the war in Ukraine pivoted to a new phase, one of brutal artillery battles and grinding attrition in eastern Ukraine's Donbas region, the Turkish-made Bayraktar TB2 drone became a decisive weapon for Kyiv's forces, though it also saw successes early on.

This famed unmanned combat aerial vehicle — which saw action aiding Azerbaijan in the 2020 Nagorno-Karabakh conflict — has been highly regarded by global militaries and even had a multi-year-long wait to obtain one. These systems became legends in Ukraine, even inspiring songs that went viral.

The TB2 drone allowed the Ukrainians to carry out precision strikes and target vulnerable Russian positions and have been used to destroy military equipment like tanks, howitzers, and infantry fighting vehicles.

For example, the TB2 was used successfully during Ukraine's efforts to recapture Snake Island in the Black Sea, where ground communication lines were unavailable. The drones were used to target occupying Russian forces, who eventually decided that they could no longer hold their positions.

Barros said that "this is a tactic that, frankly, the Ukrainians have used very effectively ever since they've had access to precision munitions that are capable of striking deep into critical vulnerable Russian areas." 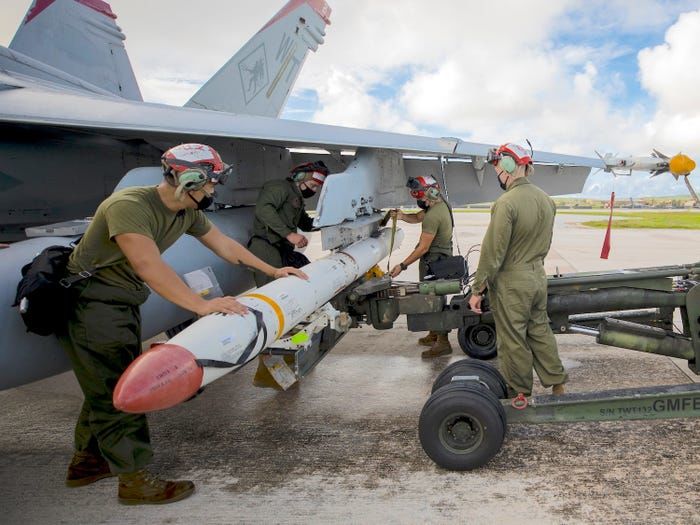 US Marines load an AGM-88 High-Speed Anti-Radiation Missile onto an F/A-18C Hornet at Andersen Air Force Base in Guam on August 13, 2021.

One weapon that helped here was the US-supplied AGM-88 High-speed Anti-Radiation Missile (HARM), an air-to-surface missile that can hunt and target enemy radar systems.

Ukraine used these missiles to threaten and hamstring Russian air-defense radars and systems, before going on to deploy tactical aircraft in what Barros described as a "limited but effective capacity." 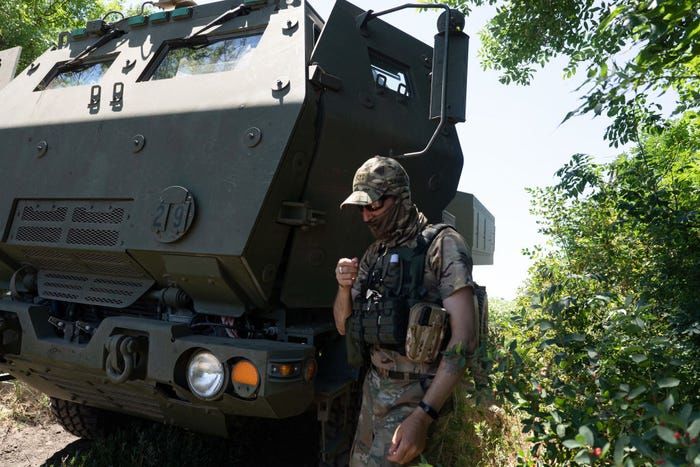 A Ukrainian serviceman as seen by the HIMARS vehicle in Eastern Ukraine on July 1, 2022.

These systems, which were much-sought-after by Kyiv, are long-range and high-precision rocket launchers capable of striking targets up to 50 miles away with the munitions provided by the US, though they have the ability to strike farther. With GPS-guided rockets, these weapons have been able to target Russian command posts, ammunition depots, and bridges.

Ukraine celebrated the arrival of the HIMARS in June, and the systems quickly became revered among top Ukrainian officials and the country's armed forces because they were so effective at a time when the war was a fast becoming a WWI-style artillery duel. The HIMARS gave Ukraine range beyond the M777 Howitzers provided by the US earlier in the conflict.

"The HIMARS stopped the bleeding in eastern Ukraine with regards to the rolling Russian offensive that was picking up steam in sort of late spring, early summer," Barros said, pointing to two specific examples where these weapons proved to be a "game changer" on the battlefield.

When the HIMARS arrived in Ukraine, Russian forces were relying on an artillery superiority to obliterate Ukrainian defensive positions in various small towns. They would then press forward into the area and "slowly sort of systematically grind their way" deeper into Ukraine, Barros said.

For this to work, Russia needed lots of artillery near their firing positions, Barros added. But Ukraine was able to use their HIMARS to target Russian ammunition depots that were providing Moscow with the consistent artillery ammunition needed to sustain a high volume of firepower.

HIMARS also played an important role during Ukraine's campaign to retake territory in the southern Kherson region, Barros said. There, Kyiv used this weapon to successfully strike a handful bridges — cutting off bands of Russian troops and creating a logistical headache for Putin.

According to an assessment of the war by the UK-based Royal United Services Institute, the introduction of the HIMARS — as well as the US-made M270 Multiple Launch Rocket System — into Ukraine "can be seen as the point where the Russian offensive on Donbas ended and the war entered a new phase."