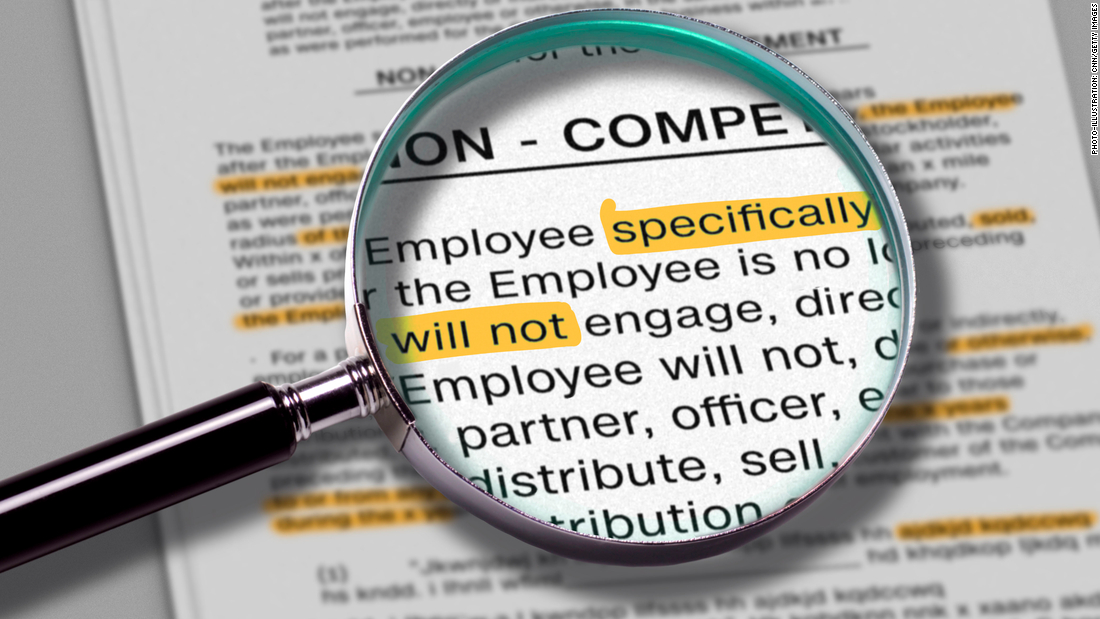 Tens of millions of US workers have signed non-compete agreements - knowingly or not - with their employers - and many of them may not even realize it.

Non-competes restrict where and when you can work after leaving your current job. Such agreements prohibit an employee from working for a competitor or from starting her own competing business within a geographical area for a certain period of time after leaving her job - usually between six months and two years.

In 2017, an estimated 28% to 47% of private sector workers were subject to non-compete agreements, according to the Economic Policy Institute.

Non-competes are typically used to keep highly paid executives from jumping ship and taking the company's secrets with them. They also are commonly used to prevent salespeople and others who work directly with customers or clients from taking those relationships with them when they leave, said employment lawyer Laurent Drogin, a founding partner with Tarter Krinsky & Drogin.

But increasingly over the years, even low wage workers have been asked to sign these agreements. The sandwich chain Jimmy John's, for instance, settled lawsuits brought by Illinois and New York in 2016 that alleged the chain required all employees, including sandwich makers and delivery drivers, to sign two-year non-competes. More recently, WeWork settled suits in the same two states that alleged the company made all employees, even cleaners and baristas, sign broad non-competes.

"Often the reason employers want them is a retention device. [It's] prophylactic. If people think they have an agreement that binds them and they may get sued, if they can't afford an attorney and need the job, they'll sign now and worry about it later. It's a scare tactic," said Drogin.

Many economists say such agreements suppress wages, reduce worker mobility and are anti-competitive.

Two bills were introduced this year in the Senate to ban non-competes for low-wage workers. Meanwhile, several states have passed legislation restricting how broad the terms may be and, in some cases, also have banned employers from using them on low-wage employees.

What to do if you're asked to sign a non-compete

You may be informed about it when you're applying for a job, in an offer letter, soon after you start a new position, or after working for your employer for years.

Or a company may include a non-compete clause in something you must sign off on, such as the employee handbook, a bonus agreement, a confidentiality agreement or a severance agreement, said attorney Donna Ballman, who runs an employee advocacy law firm in Fort Lauderdale, Florida.

Don't sign anything without first knowing what's in it. "Read everything your employer puts in front of you," Ballman advised.
If you see non-compete provisions, ask why you need to sign the agreement and what you're getting out of the deal.

You should be offered something in exchange for legally agreeing to restrict your future professional options and earning potential, such as extra pay, a promotion, special training for career advancement or a change in status so that you're no longer considered an "at-will" employee.

But the something "extra" you get may simply be keeping your job. "In Florida and in many states, an employer can say 'sign or you'll be fired,'" Ballman said.

In some states, though, such as Pennsylvania and Massachusetts, employers must provide you with something more than merely being able to keep your job, said Sidney Gold, an employee-side employment lawyer in Philadelphia.

If possible, hire an employment lawyer who represents employees to look over the agreement before you sign anything.
If that's too expensive and other people in a similar position at the company are being asked to sign the same agreement, you might consider pooling money to hire a lawyer to review the agreement for the group.

See if your employer is willing to negotiate any elements of the non-compete - e.g., shortening its duration or narrowing the geographic area to which it applies or more narrowly defining what the company means by "competitor" or "customer."

Don't assume your employer won't come after you

The fear with a non-compete is that if you violate it, the company will sue you.

No one can guarantee they won't. But employers don't always go to court over non-competes. "They look at it on a case-by-case basis," Gold said.

He said they're likely to pursue litigation, for instance, if you take the client list and start your own business.

If you go work for an established competitor, your former company may initially just send a cease-and-desist letter to your new employer, which in some instances could result in your being fired from your new job.

How to reduce the chance of a lawsuit

Before accepting a job with a competitor, send an email to whomever makes decisions on non-competes - it might be HR or someone else - alerting them to the offer and explaining why you believe it would not violate your non-compete, Ballman suggested.

"Then say, 'Unless I hear from you within 72 hours, I'll assume you agree and I will accept the position.' Send the email with a request for delivery and read receipts," advised Ballman.

You'll get one of three responses, she noted. The first is "No, we'll sue," in which case call a lawyer. The second is, "No we don't care, go ahead." And the third is, "We don't want to lose you. What can we do to get you to stay?"

If you don't get any response, Ballman added, send another email saying you assume they agree so you plan to give notice in two days. That gives them one more shot to get back to you. "Is that a total defense in court? No, but lack of good faith in enforcement is a defense. And you've shown you did everything [to give them an opportunity to respond]."

Whatever you do, Gold stressed, don't accept a job with a competitor clandestinely and hope for the best, because courts generally don't look kindly on deception. "Transparency solves a lot of problems," he said.