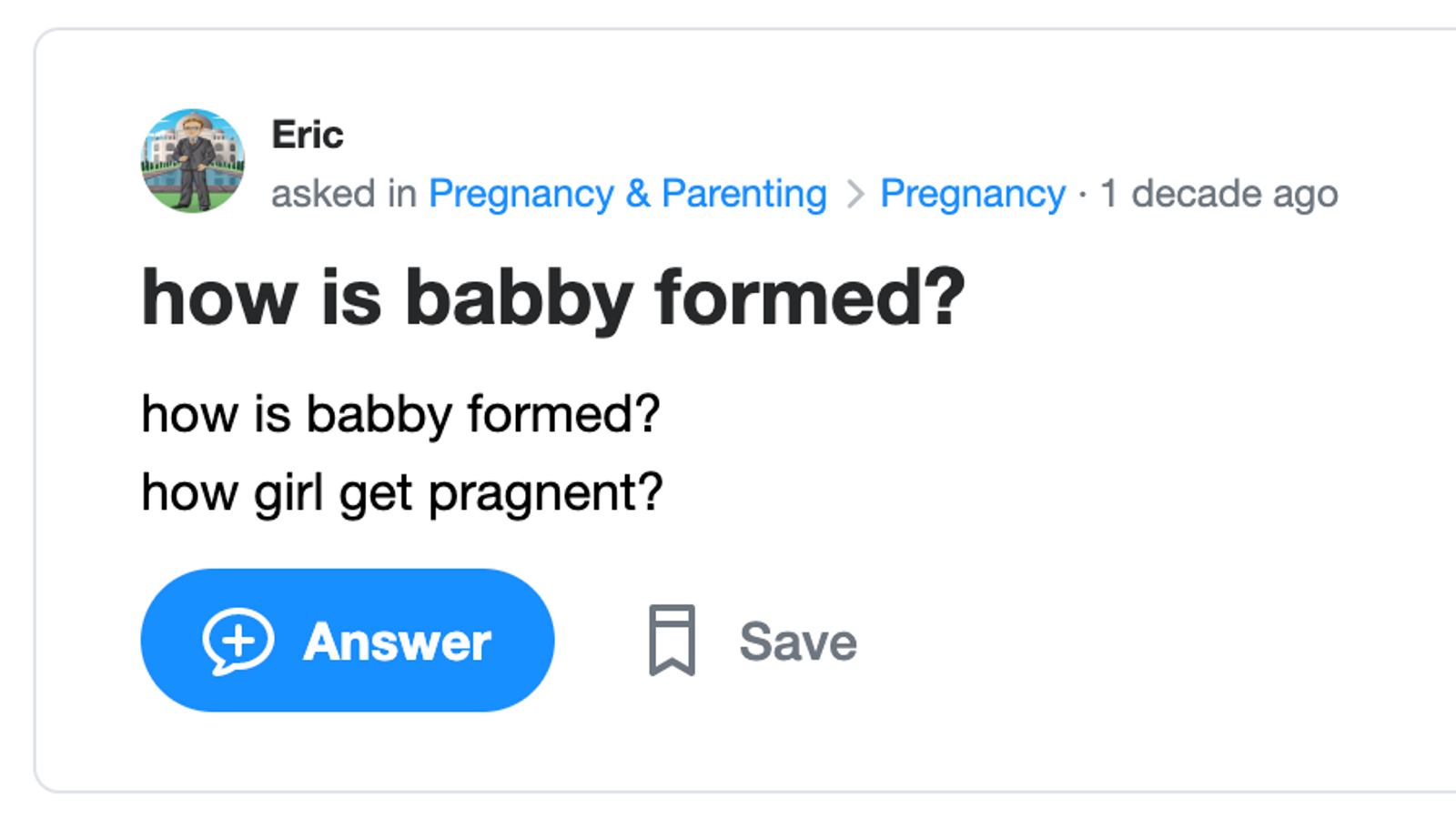 New York City millionaires will soon be subject to the highest tax rate in the country.

Yahoo Answers is going to be shut down after more than 15 years of providing the web with hilarious content.

The website is first slipping into read-only mode from 20 April, before being shut down entirely on 4 May - redirecting visitors to the Yahoo homepage instead.

When the site disappears then all of its many brilliant questions - with their innovative grammatical and spelling errors, and the amazing credulity of the askers - will be lost, like tears in rain.

While "how is babby formed? How girl get pragnent?" will forever be the site's greatest contribution to web culture, there are many more to find - at least, for the next month or so.

While we can, here are 10 more of the best questions and answers the site has ever featured. 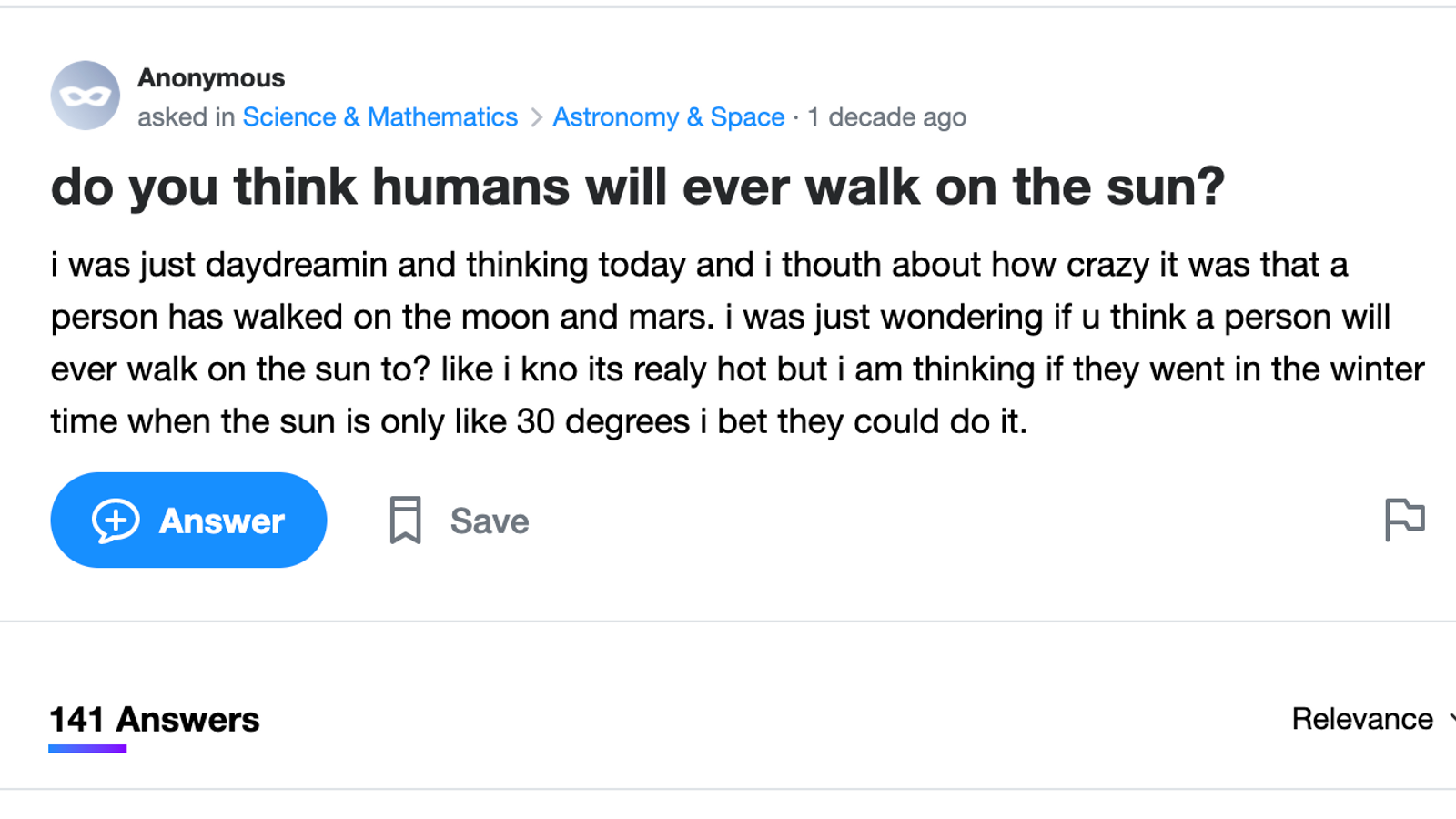 Question 1: Will humanity ever walk on the sun?

1) do you think humans will ever walk on the sun?

It is actually hypothetically possible to walk on the sun - as long as we defined what the surface was - but it would be a brief walk.

3) Is throwing your hair in the garbage safe?

The user continued: "I wanted to be sure because in biology we learned that it had DNA and stuff so is it safe?"

4) What if the girl that thinks i'm the dad isn't the mom?

This is frightening on a number of levels. 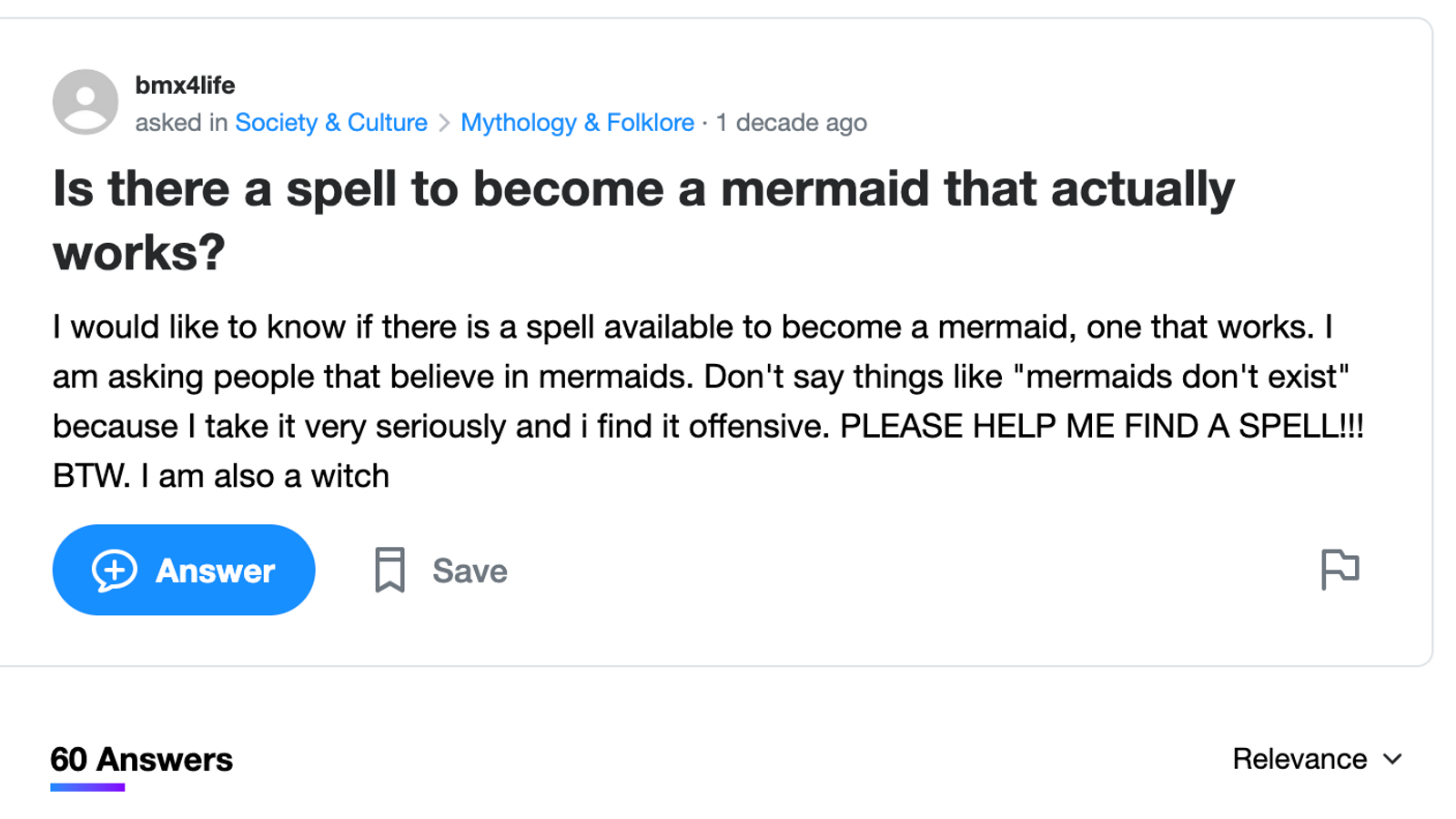 Question 5: Is there a spell to become a mermaid?

5) Is there a spell to become a mermaid that actually works?

User bmx4life only ever asked three questions, including the above.

They also asked: "My sister walks around with out socks on all the time and her feet ar starting to stink really bad, why?" and the classic: "runescape please answer?"

6) If i eat myself would i become twice as big or disappear completely?

Although official accounts claim that French philosopher Gilles Deleuze died in 1995, but this question contributes to a body of evidence he was active online up until quite recently, posting metaphysical provocations on Yahoo Answers...

This purrplexed user wrote: "Her chest always vibrates like she was worms or something in her. Is it normal? When she vibrated she makes a tiny vibrate noise and its scaring me it doesn't seem normal!" 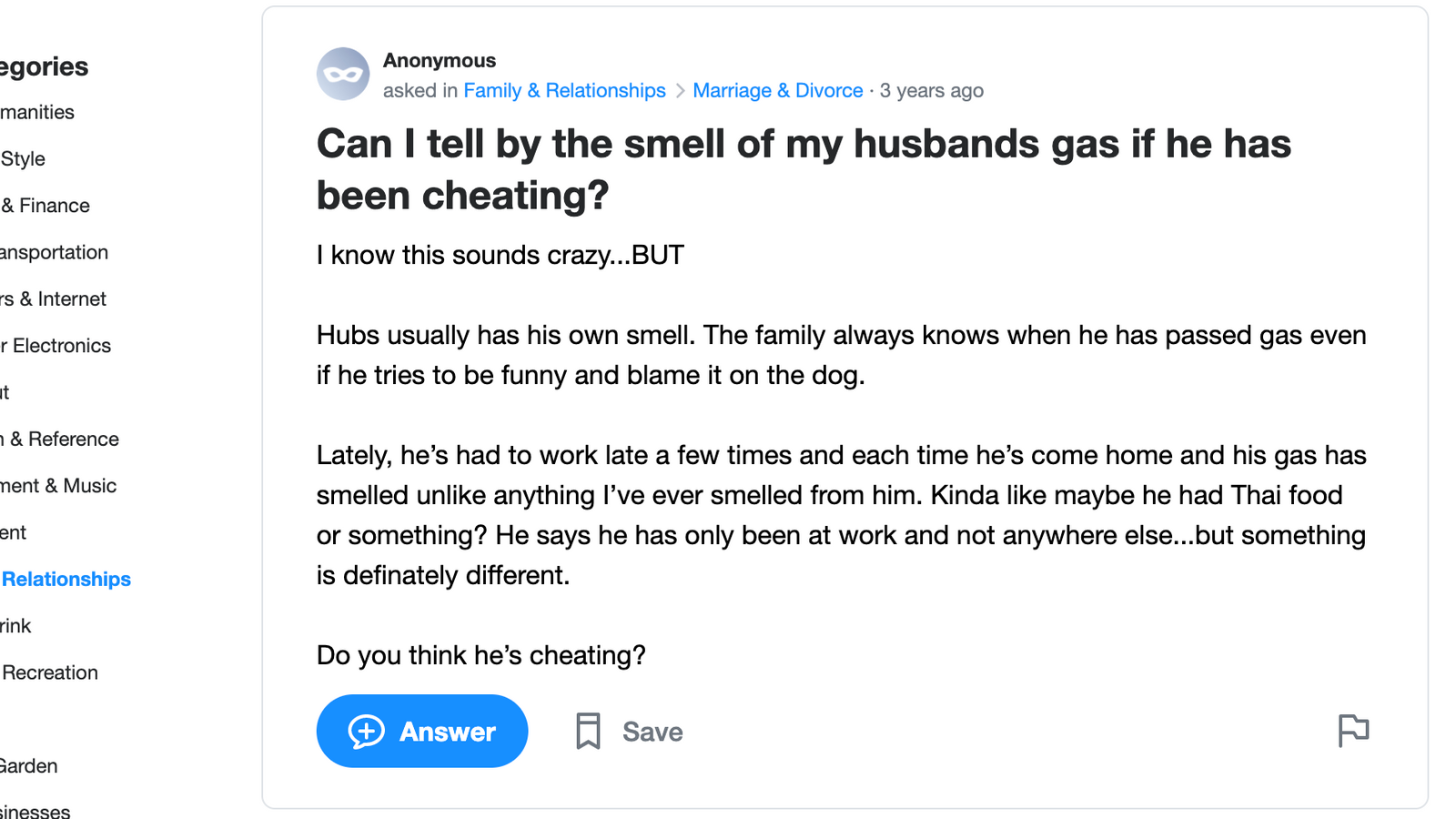 8) Can I tell by the smell of my husbands gas if he has been cheating?

"I know this sounds crazy... BUT," begins this anonymous post. Sadly, three years later, we can only imagine what the status of this marriage is as the question was never updated.

9) Will my laptop get heavier if I put more files on it? 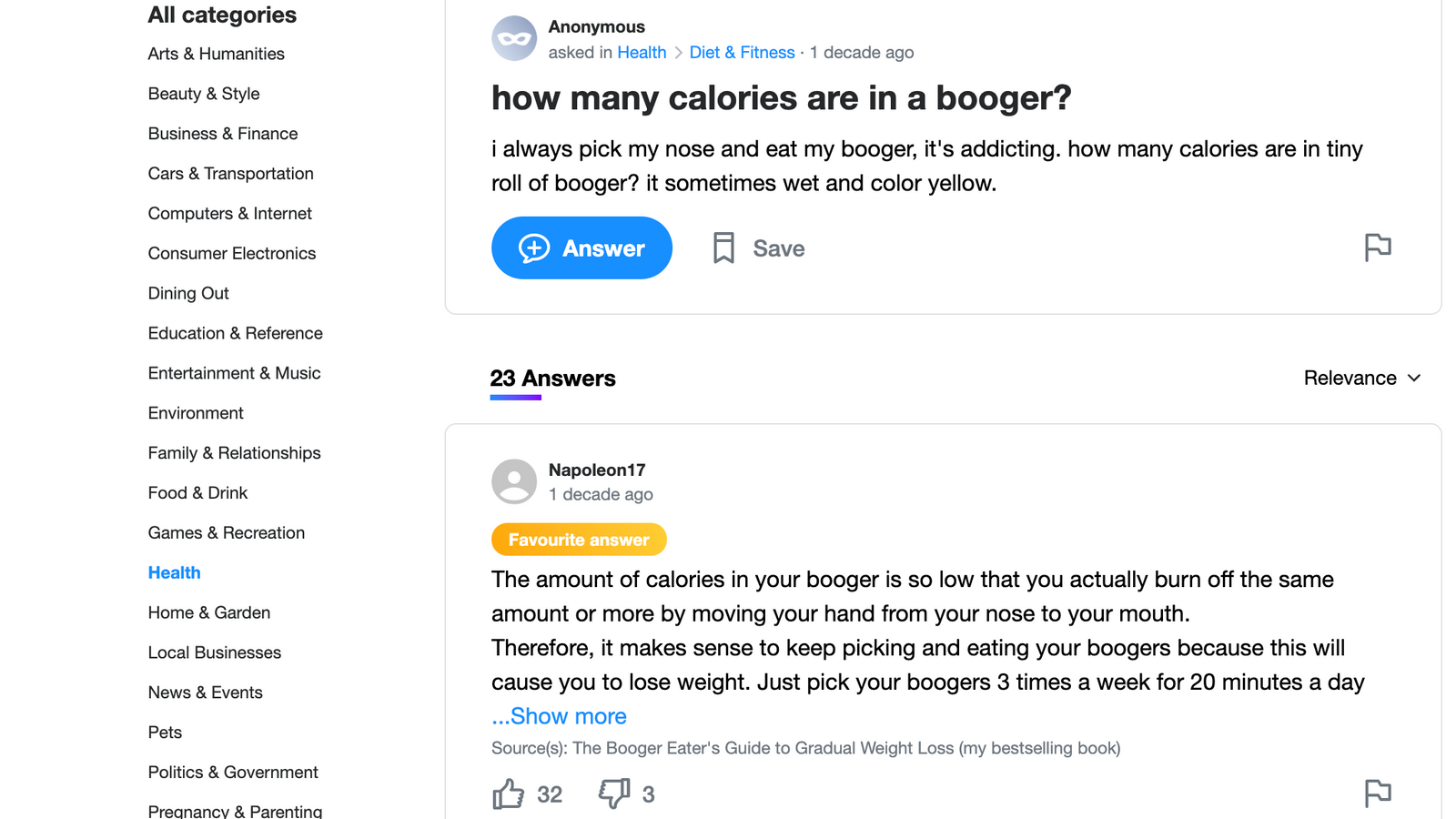 Question 10: Fad diets to sniff at

10) how many calories are in a booger?

The answer to this potential troll is even better than the remarkably poignant description: "it sometimes wet and color yellow".

There are more to be found, for another month anyway.