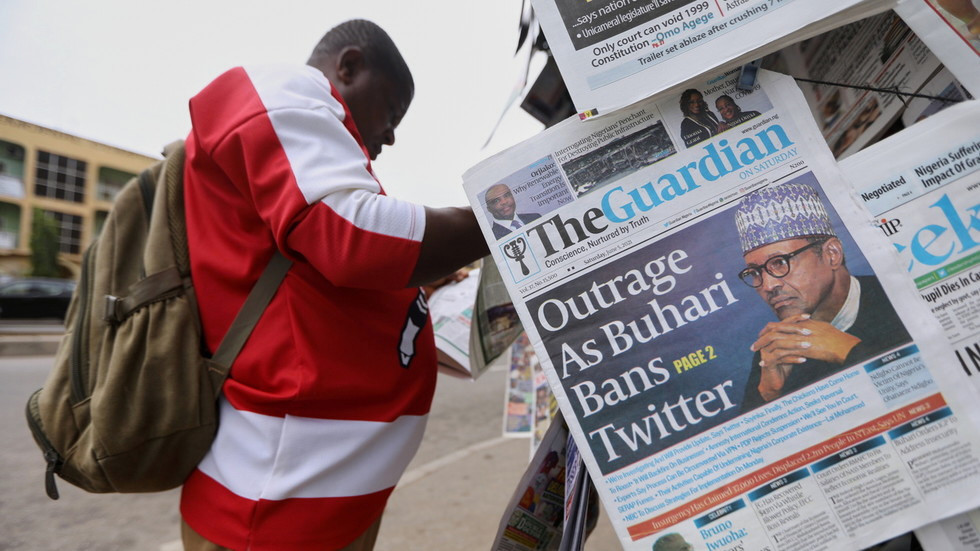 ‘You couldn’t make it up if you tried’: Twitter censors at home, but calls access to platform a ‘human right’ in Nigeria

Twitter is very concerned about its recent blocking in Nigeria, calling the free and open internet an “essential human right.” Back in the US, commentators pointed out, Twitter doesn’t care as much about this “right.”

Nigeria’s government “indefinitely” banned Twitter on Friday, after the US tech giant temporarily suspended President Muhammadu Buhari for a tweet promising a crackdown on armed separatists. Telecoms networks in the West African nation began enforcing the ban on Saturday morning, according to multiple media reports.

“We are deeply concerned by the blocking of Twitter in Nigeria,” the company stated on Saturday. “Access to the free and #OpenInternet is an essential human right in modern society.”

However Twitter’s recent actions in the US reveal a corporation much less concerned with its users’ ability to “communicate with the world” – especially if those users challenge the Democrat-supporting, Silicon Valley orthodoxy. Twitter’s executives used to describe the platform as “the free speech wing of the free speech party,” but bans and suspensions are now a threat to users posting “misinformation” – to be understood as content that challenges the liberal media consensus, or harms the political goals of the Democratic Party.

Donald Trump, while still the sitting president of the US, found himself booted indefinitely from Twitter in January after his supporters rioted on Capitol Hill, and merely posting the ex-president’s statements can now incur deletions and suspensions.

With Twitter apparently happy to play censor at home, conservatives and opponents of Big Tech scoffed at the company’s professed commitment to openness in Nigeria. “Man,” former Republican Congressional candidate Joshua Foxworth tweeted, “you have to admire the sheer cognitive dissonance here.”

Nigeria isn’t the only country that’s been treated by Twitter to a sermon on openness and freedom in recent months. When Russian regulators slowed down traffic to the platform in March, in response to violations of Russian law, Twitter complained that Russia was attempting “to block and throttle online public conversation.”